The 1950 U.S. Census Project with Ancestry and FamilySearch 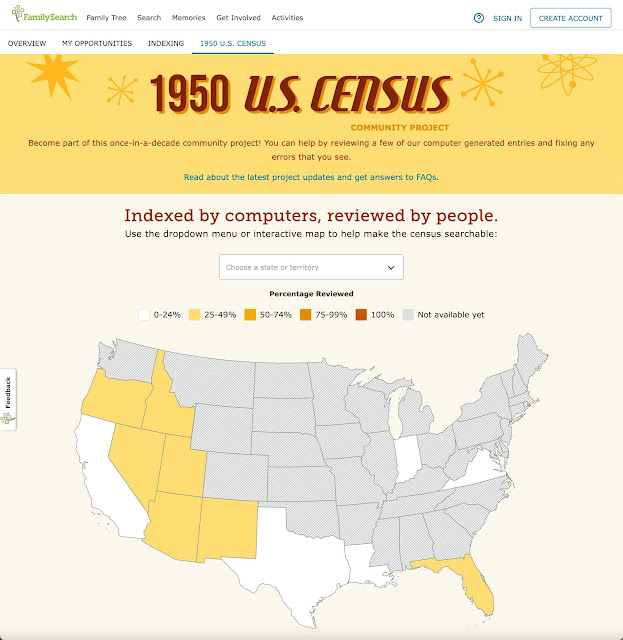 Over the past few years, Ancestry.com has developed a sophisticated program to use handwriting recognition to index the 1950 U. S. Federal Census. As soon as the 1950 Census was released, Ancestry made the digital images available on its website. Ancestry.com has made the images available to FamilySearch.org where volunteers are now involved in checking the accuracy of the handwriting recognition. The link above provides a way for you to volunteer to help check the recognized records. You can choose to review families, Review the document headers or to review names. 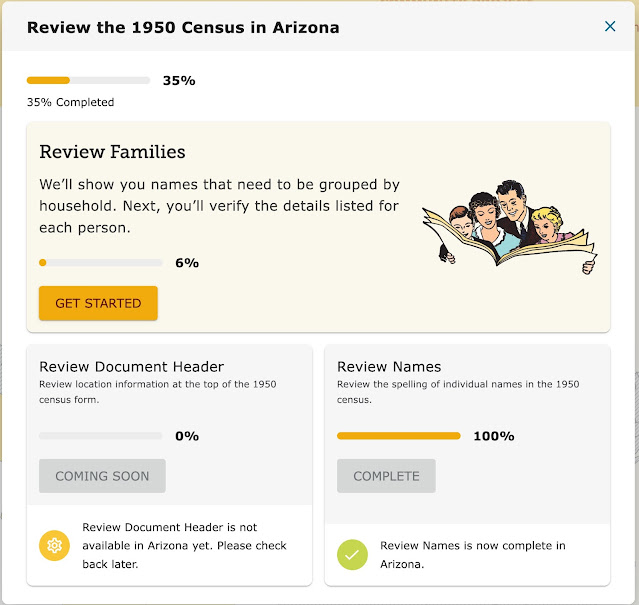 Here is an example of one of the review names items. 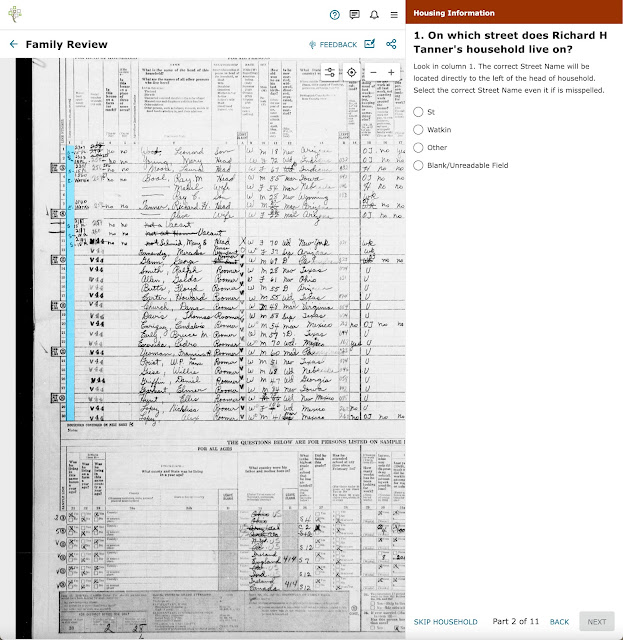 There are tutorials and Frequently Asked Questions to help you get started.

Posted by James Tanner at 3:26 PM No comments:

In his concluding remarks at the April 2022 general conference, President Russell M. Nelson of The Church of Jesus Christ of Latter-day Saints announced plans to build 17 new temples throughout the world. They will be constructed in the following locations:

Although some of these temples are in areas where other temples now exist, some of the locations are remote such as Cuzco, Peru. It takes 19 hours by car to drive from Cuzco to Lima and around 10 hours to drive to Arequipa and that is assuming you have a car and can drive that far. Public transportation is not readily available. Likewise, although there are now 14 temples already in Brazil either in use, under construction, or announced, the temple announced in Maceió, Brazil it is four hours by car and over five hours by bus from Recife, the next closest temple. The newly announced temple in Montpelier, Idaho will be about an hour and a half away from the closest temple in Logan until the Smithfield temple is completed.

All of these temples will be a great blessing to the members who live near them.

Posted by James Tanner at 8:13 AM No comments:

Elder Gerrit W. Gong: ‘We Each Have a Story’ 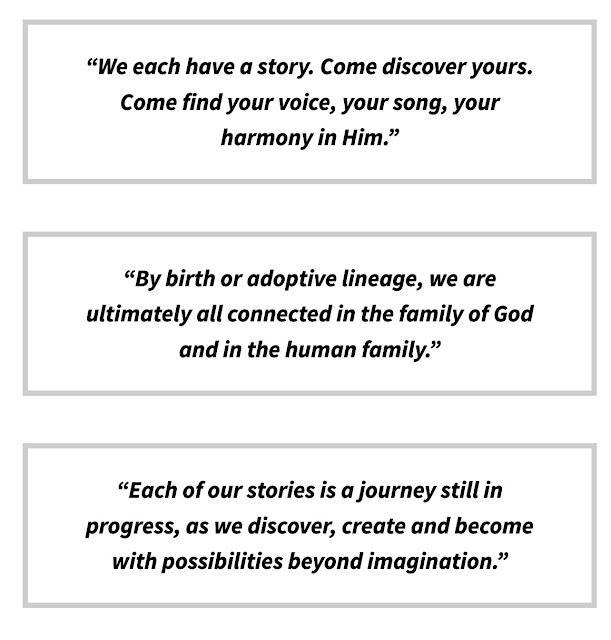 Here are some excerpts from a talk given by Elder Gerrit W. Gong at the Saturday Afternoon Session of the April 2022 General Conference of The Church of Jesus Christ of Latter-day Saints.
“We each have a story. As we discover our story, we connect, we belong, we become.”
The total number of individuals who have lived on the earth is finite and countable, one person at a time. “You and I, we each matter.”
“By birth or adoptive lineage, we are ultimately all connected in the human family and family of God.”
Connecting with our ancestors can change lives. “From their trials and accomplishments, we gain faith and strength. From their love and sacrifices, we learn to forgive and move forward.”
“Each of our stories is a journey still in progress, as we discover, create and become with possibilities beyond imagination.”
How can we connect?
First, see yourself in both generational directions — child, grandchild, great-grandchild, then parent, aunt or uncle, grandparent, great-grandparent. “In each time and role, notice who is with you. Gather their photos and stories; make memories real.”
“Second, let the adventure of family history be intentional and spontaneous.”
Third, visit FamilySearch.org.
Fourth, help unite families eternally.
“We each have a story. Come discover yours. Come find your voice, your song, your harmony in Him.”
It has been a year since I published anything on this blog. I feel like I am coming out of a long tunnel, and I need to extend my reach as a Church Service Missionary for The Church of Jesus Christ of Latter-day Saints once again. I think it is time once again to be heard from this aspect of my life (even if this blog is still banned from Facebook).
Posted by James Tanner at 11:29 AM No comments:

This video is a wonderful summary of the promised blessings of both work in the Temples and doing family history research. See also The Purpose of Temple and Family History Work.

Posted by James Tanner at 3:20 PM No comments: 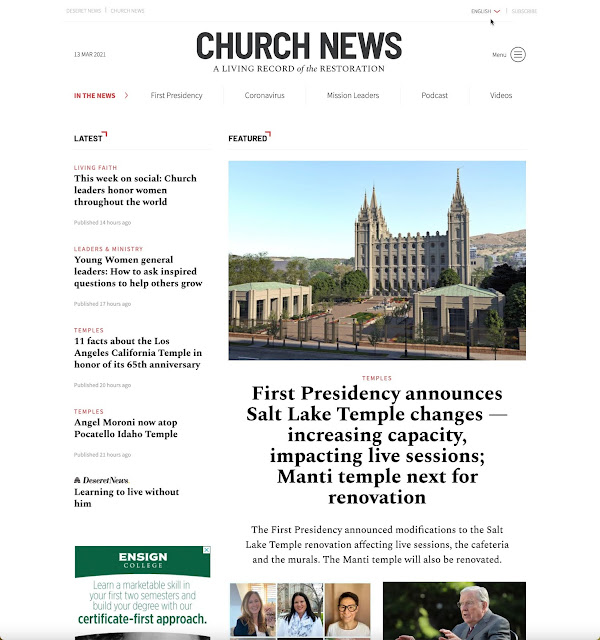 The First Presidency of The Church of Jesus Christ of Latter-day Saints announced Friday morning modifications to the ongoing renovation of the Salt Lake Temple, as well as a planned upgrade of the Manti Utah Temple.

The modifications for the Salt Lake Temple include adding a second baptistry and additional instruction and sealing rooms — increasing capacity for the sacred building which was originally dedicated in 1893. The temple cafeteria will be discontinued.

The Manti temple will join the Salt Lake Temple and the St. George Utah Temple as the third pioneer-era temple dating back to the late 19th century to undergo renovations. Plans and a starting date for the renovation will be announced later this year.

The modifications to the Salt Lake City, Utah Temple are further explained as follows:

While seismic protection is the primary reason for the renovation, the Church also is taking the opportunity to make other improvements and changes, according to leaders.

Recent modifications include the addition of two instruction rooms, more sealing ordinance rooms and a second baptistry, which allow for greater capacity and more temple ordinances being performed; leaders anticipate with the changes the temple will be able to accommodate more than double the usual number of patrons.

When the renovation is completed, the temple will have a total of five instruction rooms, each with a capacity for 150 people. Four instruction rooms will be located on the temple’s first floor, with the fifth on the second floor.

The addition of 10 new sealing rooms brings the total number to 23, with varying capacities of up to 75 individuals.

We haven't been up to Salt Lake City for a while due to the pandemic but we are really interested in seeing the new changes to the Salt Lake City, Utah Temple once the open house is announced.

Posted by James Tanner at 6:55 AM No comments: 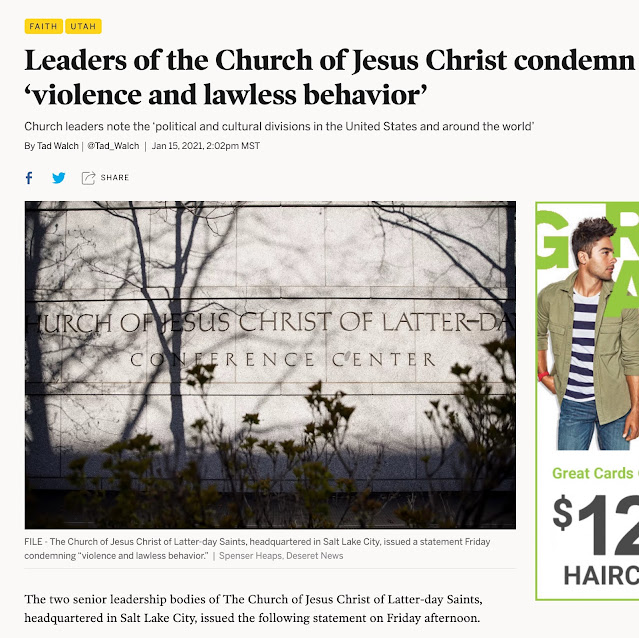 Quoting from the Deseret News article of January 15, 2021:

The two senior leadership bodies of The Church of Jesus Christ of Latter-day Saints, headquartered in Salt Lake City, issued the following statement on Friday afternoon.

Here is the full statement from the First Presidency and the Quorum of the Twelve Apostles, who direct the affairs of the global, 16.5-million member church:

“Principles of government that allow God’s children to maintain human dignity and freedom belong to all mankind (see Doctrine and Covenants 98:5).

“With great concern we observe the political and cultural divisions in the United States and around the world. We condemn violence and lawless behavior, including the recent violence in Washington, D.C., and any suggestion of further violence. While The Church of Jesus Christ of Latter-day Saints is neutral in matters of party politics, we remind our members — whatever their individual political views — to be united in our commitment to the Savior, Jesus Christ, and His teachings. As His followers, we should treat one another and all of God’s children with respect, dignity and love. No political or other affiliation should supersede that covenant and sacred responsibility.

“We urge all people to remember the precious and fragile nature of freedom and peace. As citizens of the United States look ahead to the inauguration of a new president, we urge our members to honor democratic institutions and processes, and to obey, honor and sustain the law (see Articles of Faith 1:12).”

The General Handbook of The Church of Jesus Christ of Latter-day Saints at Section 38.8.45 clearly states the following:

In today’s world, information is easy to access and share. This can be a great blessing for those seeking to be educated and informed. However, many sources of information are unreliable and do not edify. Some sources seek to promote anger, contention, fear, or baseless conspiracy theories (see 3 Nephi 11:30; Mosiah 2:32). Therefore, it is important that Church members be wise as they seek truth.

Members of the Church should seek out and share only credible, reliable, and factual sources of information. They should avoid sources that are speculative or founded on rumor. The guidance of the Holy Ghost, along with careful study, can help members discern between truth and error (see Doctrine and Covenants 11:12; 45:57). In matters of doctrine and Church policy, the authoritative sources are the scriptures, the teachings of the living prophets, and the General Handbook.

Posted by James Tanner at 7:24 AM No comments:

The number of indexed records on FamilySearch.org grows every week 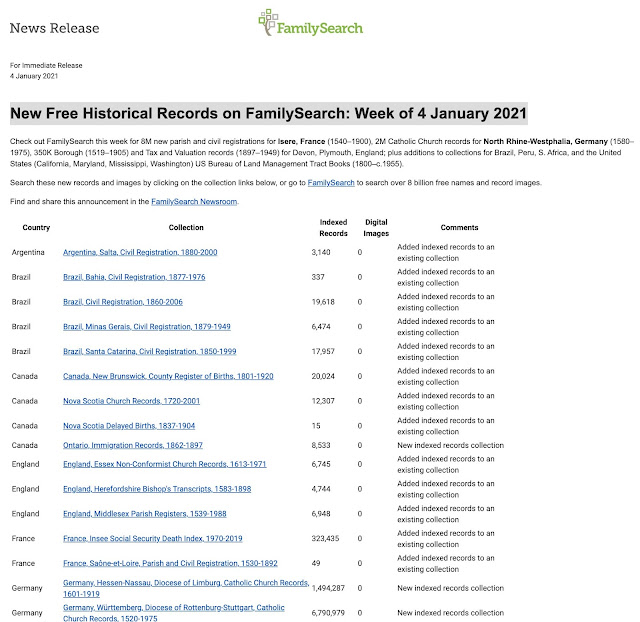 New Free Historical Records on FamilySearch: Week of 4 January 2021
Unless you have enabled notifications in your FamilySearch.org Settings, You may not be getting the emails weekly about the newly indexed records being added to FamilySearch.org. Here is a screenshot of the Notifications page. 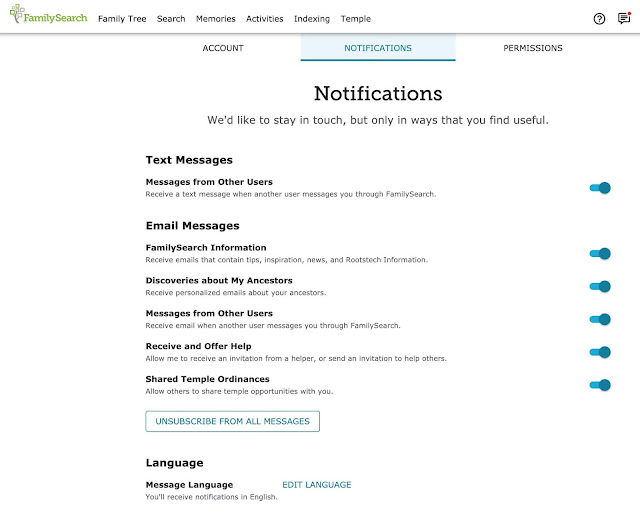 If you begin to realize how many newly indexed names are regularly added, you should also realize that watching the new record hints added to your file would be a good idea. It is also a good idea to go back periodically and search on some of the people who have no sources to see if new records have been added that may not yet show up as record hints.
The FamilySearch.org website is constantly changing.
Posted by James Tanner at 1:13 PM No comments: