The painting above depicts an event described in the Bible in Genesis (32:22–32; also referenced in Hosea 12:4) when Jacob wrestled with an angel and subsequently, received a new name, "Israel."

President Russell M. Nelson of The Church of Jesus Christ of Latter-day Saints spoke in the Sunday morning session of the Church's 190th Semi-annual General Conference on October 4, 2020. He began his talk by explaining that he had learned a new meaning of the word "Israel." The most common translation is "contends with God" but President Nelson indicated that Hebrew scholars also translated "Israel" as "Let God Prevail." He then gave some examples of letting God prevail including abandoning attitudes and actions of prejudice. See "President Russell M. Nelson: Let God Prevail."

I was impressed by his comments. Most of my early life was spent in a small town in eastern Arizona and in the larger city of Phoenix. After leaving Phoenix for a few years I returned and lived many years in Phoenix, Scottsdale, and Mesa. It took me a number of years away from Arizona and living in Argentina and Panama to realize that I grew up in de facto segregated communities. None of the grade schools or the high school I attended had any significant minority students despite the fact that Arizona has a significant minority population. Currently, the non-Hispanic White population is about 54% of the population.

As I grow older, I have become increasingly aware of the systematic and cultural racism that exists in the United States. Part of my awareness comes from speaking Spanish fluently and subsequently being involved as an attorney in the Hispanic community representing Spanish speaking clients and teaching Spanish as a second language in the local community college system. Living in Panama made me acutely aware of the prejudice harbored against the Black community.

Now, President Nelson had some very specific things to say about racism. Here is a quote from the above-linked article.

“Brothers and sisters, please listen carefully to what I am about to say. God does not love one race more than another. His doctrine on this matter is clear. He invites all to come unto Him, ‘black and white, bond and free, male and female’ (2 Nephi 26:33). I assure you that your standing before God is not determined by the color of your skin. Favor or disfavor with God is dependent upon your devotion to God and His commandments, and not the color of your skin.

“I grieve that our Black brothers and sisters the world over are enduring the pains of racism and prejudice. Today, I call upon our members everywhere to lead out in abandoning attitudes and actions of prejudice. I plead with you to promote respect for all of God’s children.

Although his words specifically identified Blacks as the object of racism, his words clearly apply to any discrimination of anyone because of their supposed "race."

As a genealogist, I have learned that due to current studies in DNA testing, the concept of race can no longer be clearly defined. Here is a statement on the subject from Harvard University, Graduate School of Arts and Sciences.

'Race’ cannot be biologically defined due to genetic variation among human individuals and populations. (A) The old concept of the “five races:” African, Asian, European, Native American, and Oceanian. According to this view, variation between the races is large, and thus, the each race is a separate category. Additionally, individual races are thought to have a relatively uniform genetic identity. (B) Actual genetic variation in humans. Human populations do roughly cluster into geographical regions. However, variation between different regions is small, thus blurring the lines between populations. Furthermore, variation within a single region is large, and there is no uniform identity.

I will have more to say on this subject in the future.

Posted by James Tanner at 5:24 PM No comments:

FamilySearch has over 8 billion searchable names in historical records 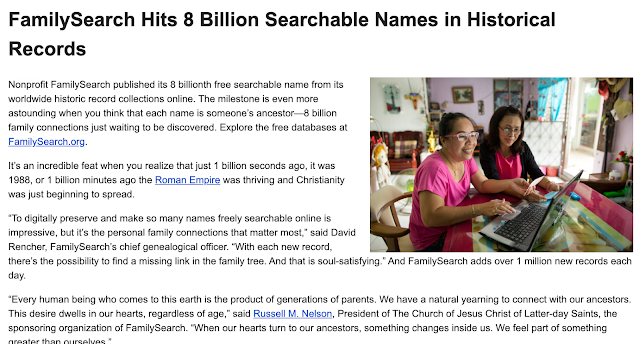 A news announcement from FamilySearch recently noted the following:

Nonprofit FamilySearch published its 8 billionth free searchable name from its worldwide historic record collections online. The milestone is even more astounding when you think that each name is someone’s ancestor—8 billion family connections just waiting to be discovered. Explore the free databases at FamilySearch.org.

It’s an incredible feat when you realize that just 1 billion seconds ago, it was 1988, or 1 billion minutes ago the Roman Empire was thriving and Christianity was just beginning to spread.

“To digitally preserve and make so many names freely searchable online is impressive, but it’s the personal family connections that matter most,” said David Rencher, FamilySearch’s chief genealogical officer. “With each new record, there’s the possibility to find a missing link in the family tree. And that is soul-satisfying.” And FamilySearch adds over 1 million new records each day.

The last sentence in this short excerpt is important: "And FamilySearch adds over 1 million new records each day." Researching online is always an ongoing process. Because records are added every day, you never know if what you are looking for and could not find has recently been added to the online collections.

Posted by James Tanner at 7:09 AM No comments: