Are we really cousins? 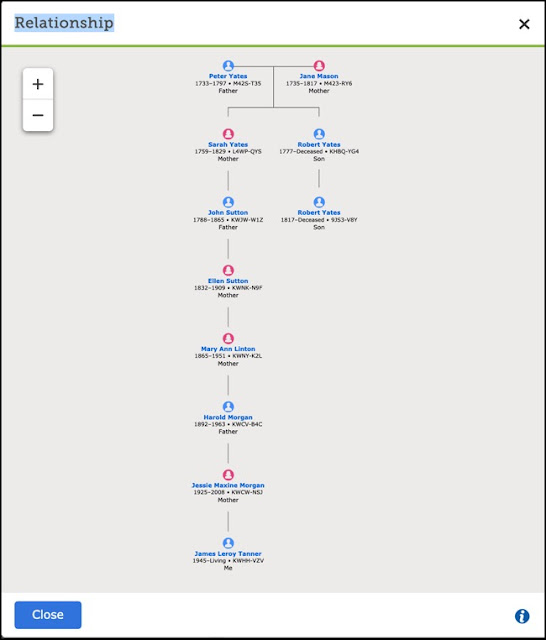 One of the new popular apps from FamilySearch is Relatives Around Me app available on the FamilySearch Tree app for mobile devices. It works when there are other people using the app in the same limited area. The app is both interesting and entertaining.  But am I really related to all those people who show up on the app? The other day at the Brigham Young University Family History Library, one of the patrons wanted to know if we were related and yes, we were. In fact, quite closely and easily verified. But what about remote relationships such as the one illustrated above?

The basic premise of the app is that the relationships shown in the FamilySearch.org Family Tree are accurate. Sorry, but this is not always the case. If I look closely at the pedigree shown above that I got by clicking on View-My-Relationship, I find that one of the links has only one source and was born in a place that is relatively distant from the place where his father is listed as living. I would assume that these people were not related. Additionally, I find additional sources listed for the person known as Robert Yates and he was born in Oswaldtwistle, Blackburn, and none of the other listed children or his parents were born in Blackburn.

This pedigree is basically an invitation to do some research. Its value showing an accurate relationship is minimal and very likely inaccurate. Before you start embracing your newly discovered relatives, I would do a little bit of basic research to see if the links are logical, consistent, and supported by the sources cited. Of course, if there are no sources and the relationship is faulty, then ignore the connection.
Posted by James Tanner at 10:55 AM 3 comments:

How Ordinances Ready has changed my way of doing research 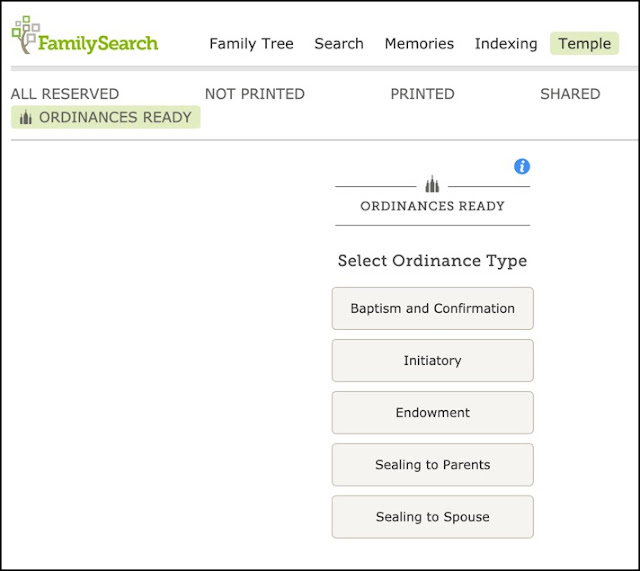 In the past, there have been a number of programs designed to search through the FamilySearch.org Family Tree for "temple opportunities." The generic term for these programs is "ordinance crawlers." Most of these programs simply looked for individuals with green temple icons. Some of them were and are a bit more sophisticated and provided additional information about the entries in your portion of the Family Tree that included incomplete temple work. Over the past few years, I have used many of these programs and some of them are extremely valuable in assisting in genealogical research. About a year ago, FamilySearch introduced its own program, Ordinances Ready, that searches on multiple levels to find your own temple opportunities.

The initial reactions of genealogists to the program were very mixed. I wrote about how the program was changing the FamilySearch Family Tree in a blog post entitled, "A New Paradigm for the FamilySearch Family Tree." Moving from third-party apps to an integrated one initiated a significant change in the process of "finding a name to take to the temple." From my own observations and from the accounts of others, in many Wards and Stakes, there has been a significant increase in both temple activity and by members taking family names to the temples although the actual increase is not generally available.

But the introduction of the Ordinances Ready app has had a more far-reaching change on the way I do research in the Family Tree. I wrote about this change in a post entitled, "Using the Ordinances Ready App to Find Research Opportunities." Now, after a year or so of taking advantage of this new venue for finding people who need ordinance work, I thought it was time to discuss an update.

The person highlighted in my early post was George Orr GMZP-9Q4. The Ordinances Ready app showed that his baptism and confirmation were available. A recent check shows that someone performed both for him shortly after my post was put online. But what about the other obviously available ordinances for others that were closely related to George Orr? He was the husband of one of my cousins, therefore, my opportunities to perform ordinances his family as opposed to those who are more directly related to me are limited. Also, he was supposedly born in 1784 and the place of his birth was listed only as Pennsylvania, United States which also placed some practical limitations on additional research opportunities. He also has no sources attached.

At this juncture, I need to point out that George Orr's name had already been submitted to the temple by someone else. Ordinances Ready had found him in the Temple List. This means that without the Ordinances Ready app, I would not have had the opportunity to perform his baptism and confirmation. Those ordinances would simply have gone into the queue and waited for his name to come up among all the others waiting for their ordinances to be done. As a matter of fact, there are still two of his ordinances left to be done. But absent being found by Ordinances Ready, it may be a long time before those remaining ordinances, shared with the Temple in November of 2018 are done. Shared male endowments are apparently taking a very long time to be completed.

How many other ordinances are there waiting to be performed for George Orr and his family? How many for his wife's family? The Family Tree gives us a simple way to see what those opportunities look like. First, I need to view George's own family tree segment. 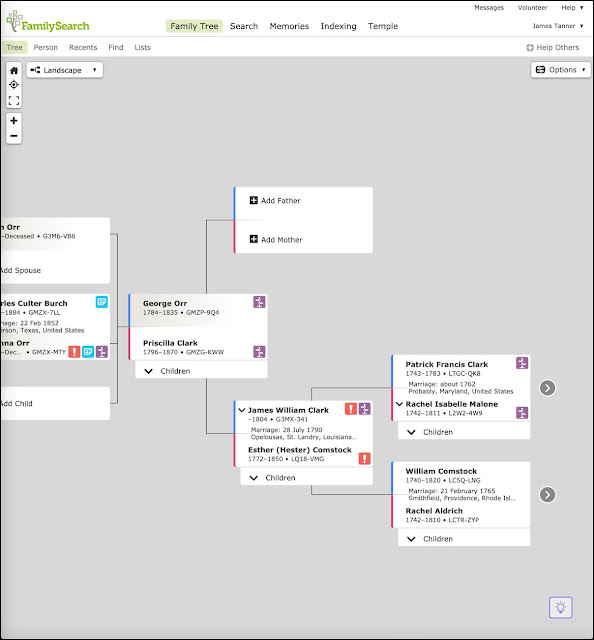 No one has yet found his parents. 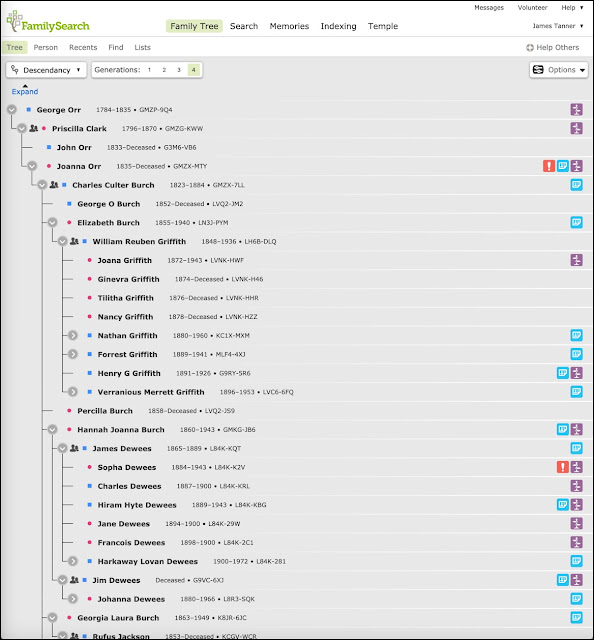 FamilySearch has found a large number of Record Hints for this family. Choosing one of these descendants randomly, I find Hiram Hyte Dewees with no spouse and no children in the Family Tree but with some Record Hints. One Record Hint is a census record that shows him and his wife and seven children. Due to the 110 Year Rule, I cannot do the ordinances for this family without permission but I might add them to the Family Tree but since they were all born within the last 110 years, I do not know if they are living and even if I add them, I would be the only person who could see them. So, I elect to add the wife but not the children at this time and wait to see if someone else who is more closely related finds them with the sources I have already added. On the other hand, if I do add them, even if I have to mark them as living, I could do some research and see if they are deceased. But, of course, the 110 Year Rule would still prevent me from doing the ordinances.

Hmm. By adding one child's name, James C. Dewees, I find that he has a Death Record. Even though I cannot do the ordinances, he will still appear in the Family Tree with a green temple icon and someone who is related can now find him and do the ordinances.

If I bang away at some of my missing ancestors in the 17th and 18th Centuries, I can spend literally years before I find anyone to add to the Family Tree. By using the Ordinance Ready app as a research tool, I can find a family with dozens, perhaps hundreds of opportunities.

Now, what do I do with all these names? Obviously, I cannot do all the ordinances myself. So, I share them with the temples. All of them. If my family members need names to take to the temples, they can use the Ordinances Ready app to find these shared names. I can do what I do and that is finding new people for the Family Tree.

Think how many more ordinances are waiting from just this one family.
Posted by James Tanner at 6:50 AM 5 comments:

Welcome to the FamilySearch Community

FamilySearch.org has an extensive community of support for the website's users. There are dozens, perhaps hundreds, of special interest groups. Essentially, you can get the support and interaction of the groups without the open, lack of privacy of Facebook or other social networking websites. The Community section of the FamilySearch.org website is located in the drop-down Help menu.

You can also ask questions in a number of different categories.

You can also have connections with special interests that match your own background and experience.

All in all, the Community section of the FamilySearch.org website is another of the hidden gems.
Posted by James Tanner at 2:15 PM No comments:

Both Sides of the Veil 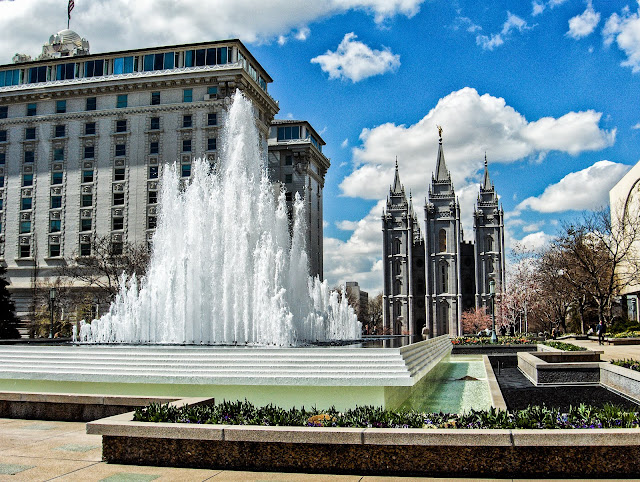 During talks and presentations of the General Authorities of The Church of Jesus Christ of Latter-day Saints, it has become common recently to speak of doing missionary work "on both sides of the veil." This is extraordinarily well highlighted by a presentation given by President Russell M. Nelson. I am personally surrounded by people, both in and out of the Church who have little or no interest in participating in the redemption of the dead. I often feel a deep sadness because of the attitude of those around me towards this great work. Here is a short video of the presentation.

The tools have been provided for us to become a part of this great work "on both sides of the veil." If you have not yet become involved, I suggest that you begin today and start by making use of the Ordinances Ready app on both iOS and Android devices as well as available in the FamilySearch.org Family Tree program for desktop computers and tablets.

Begin today!
Posted by James Tanner at 10:46 AM No comments: 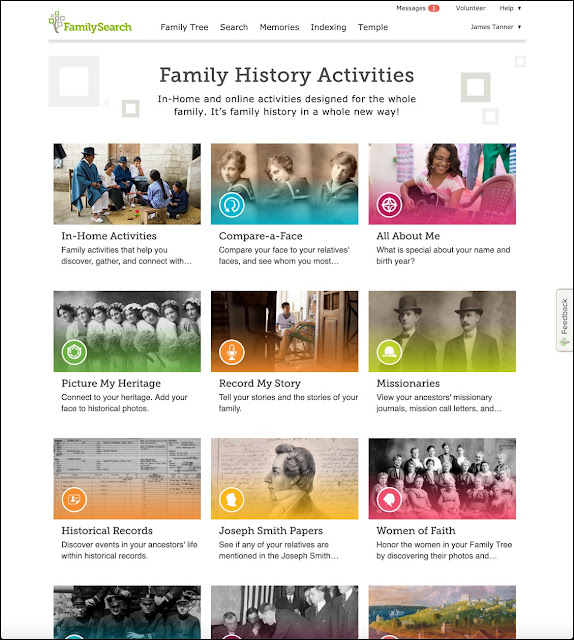 The FamilySearch.org Family History Activities page is usually available from a link on your custom designed start-up page. You can go directly to the page by using this URL: https://www.familysearch.org/discovery/

Because most of my direct line ancestors joined The Church of Jesus Christ of Latter-day Saints and crossed the Plains to the Salt Lake Valley, some of these activities have a lot of responses for my family. For example, there are twenty ancestors who appear in the Nauvoo activity although there are a few surprises. 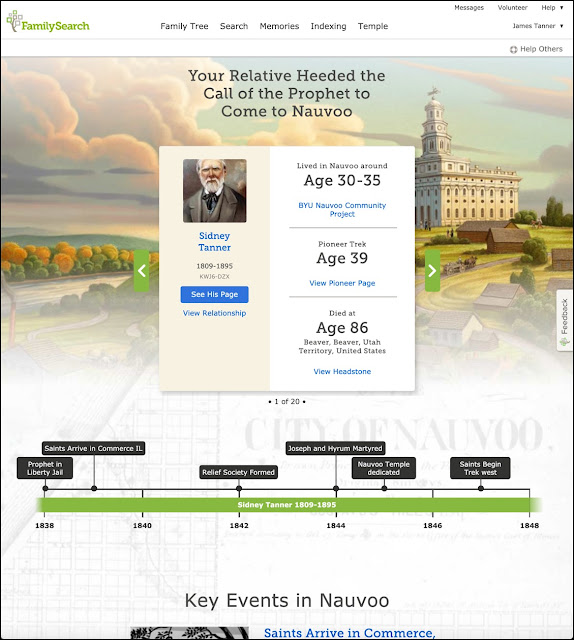 It also looks like I have twenty early missionaries but I think the activities stop at twenty. I think it is an interesting experience to explore all of these discoveries. Take some time to work through and you might have your own surprises.
Posted by James Tanner at 1:52 PM No comments: