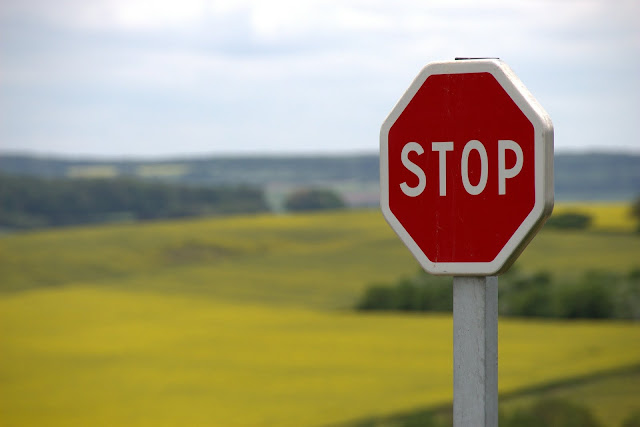 Recently, I have been hearing an increasing number of stories from people who have visited a Family History Center for help in finding names to take to the Temples of The Church of Jesus Christ of Latter-day Saints who have been told that there are no such opportunities available to them. In the most recent example of this egregious problem, my friend was referred to the same Family History Center for help on two separate occasions and talked to two different people both of whom, after a cursory review of my friend's portion of the FamilySearch Family Tree told her that there were no "opportunities" for research and that she should just go home. More recently, she has learned about the Ordinances Ready program from FamilySearch.org and is thrilled with the opportunities she now has to take some of her own family names to the Temple.

Telling someone that their portion of the Family Tree is not in need of any further research is simply a lie. Even if a person is adopted or a foundling, they can take a DNA test and try and find some relatives. In almost 38 years of examining thousands of pedigrees, I have never found one that could not be extended either by ascendancy or descendency research. If a person has enough motivation and interest to visit a Family History Center why would you kill that interest by telling them that nothing could be done?

I wish I could have the opportunity to sit down with these people who tell others that they have no opportunities and spend an hour or two going over their own portion of the Family Tree. I am sure I could show them that their own tree is full of errors, inconsistencies, and has more than enough opportunities to keep them busy the rest of their lives.

As the World Turns for Blogs from Active to Inactive 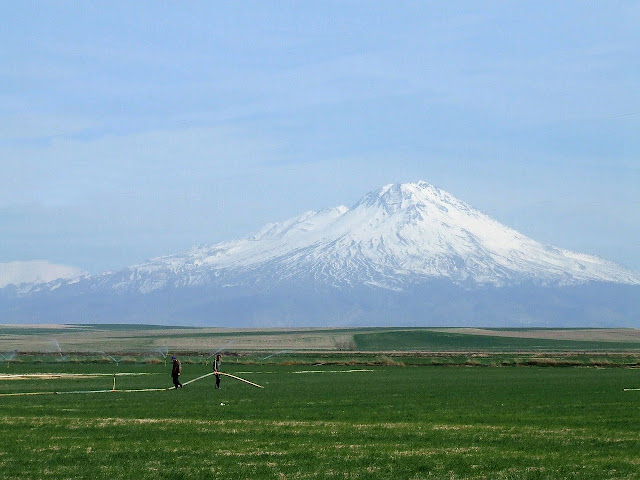 Back in 2015, I wrote a short blog post listing some of the blogs that I found online that talked about genealogy from the standpoint of The Church of Jesus Christ of Latter-day Saints. The blog post was entitled, "List of LDS Family History Related Blogs." Now, about two years later, I decided to see how many of these blogs were still active. I have marked the ones that are now active or inactive or explained what has happened to the blogs in comments following the links. I consider the blog to be inactive if there are no new posts for the last year.

Out of 17 blogs, 7 of them are now inactive after 4 years. This is not too surprising. I am sure that many new blogs have been started during that time period and when I get back to the United States, I will make a new search for blogs that include content about The Church of Jesus Christ of Latter-day Saints.
Posted by James Tanner at 11:07 AM 2 comments:

Time off to travel 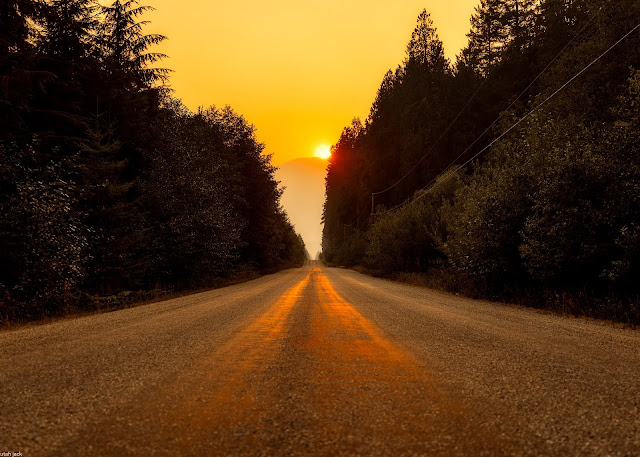 We are taking some time to travel and we will be mostly offline for a while. You might hear from me if I get a good internet connection but posts will be intermittent.
Posted by James Tanner at 12:43 PM No comments:

Because I have been invited to speak at the MyHeritage LIVE 2019 conference in Amsterdam, the Netherlands, they have also invited me to have an exhibit table. So my wife and I will be representing The Family History Guide in the Exhibit Hall. I am honored to be included in the impressive lineup of speakers at this year's Conference.

At MyHeritage LIVE, in addition to a plenary session from MyHeritage Founder and CEO, Gilad Japhet, there will both genealogy and DNA lecture tracks and hands-on workshops to take attendees through MyHeritage tools and features step-by-step.

We hope to see you there.
Posted by James Tanner at 7:09 AM No comments:

The Family History Guide will be at RootsTech 2019 London

FamilySearch.org has announced the keynote speakers for RootsTech 2019 in London. The full RootsTech London keynote speaker line-up includes Dan Snow, Steve Rockwood, Nick Barratt, and Donny Osmond. There are over 150 sessions planned. The Family History Guide will be there greeting everyone in the Exhibit Hall along with over 100 other vendors. This will be a new experience for The Family History Guide, staging a conference exhibit across the ocean. My wife and I will not be able to be there because of family commitments, but we are sure that those that attend will see some great exhibits, attend some wonderful classes and listen to world-class keynotes.

Rootstech 2019 London will be held October 24th to 26th in the ExCel Conference Center in London, England.


Posted by James Tanner at 6:41 AM No comments: 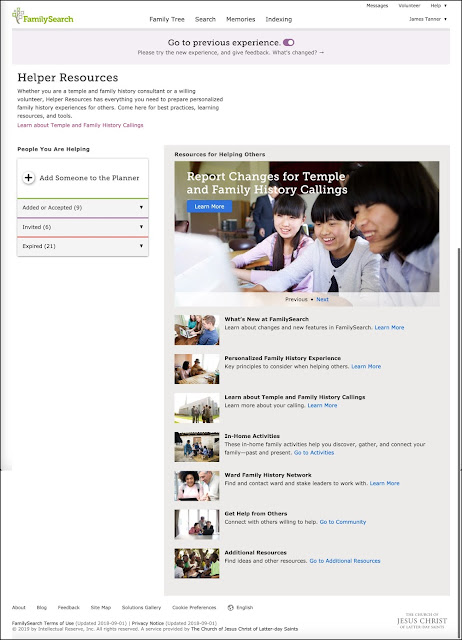 The Family History Guide is now directly linked from FamilySearch.org. 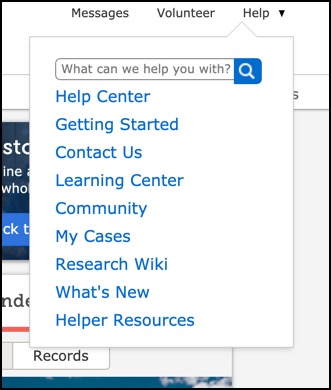 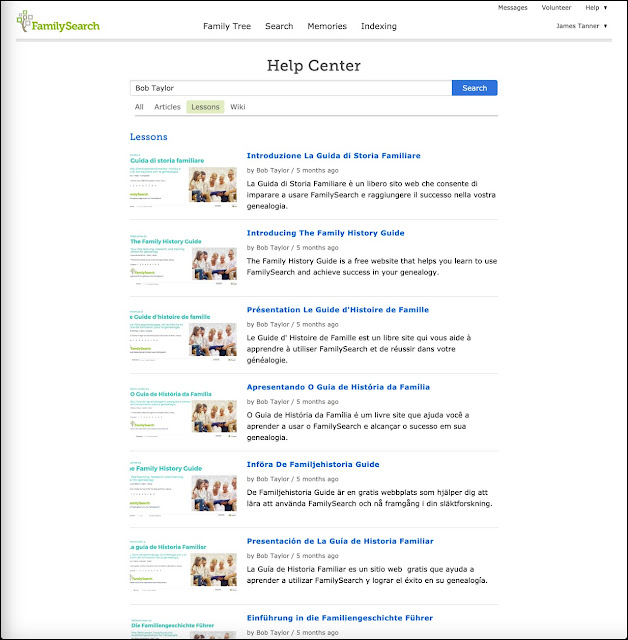 The main connection between the FamilySearch.org website and The Family History Guide is through the Helper Resources selection shown above. The link is located in the "Additional Resources" section. 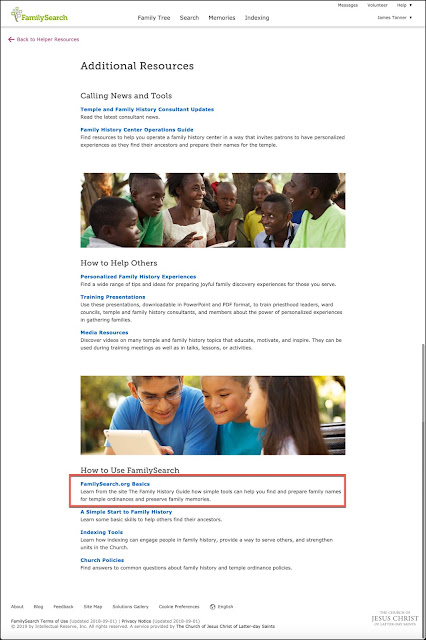 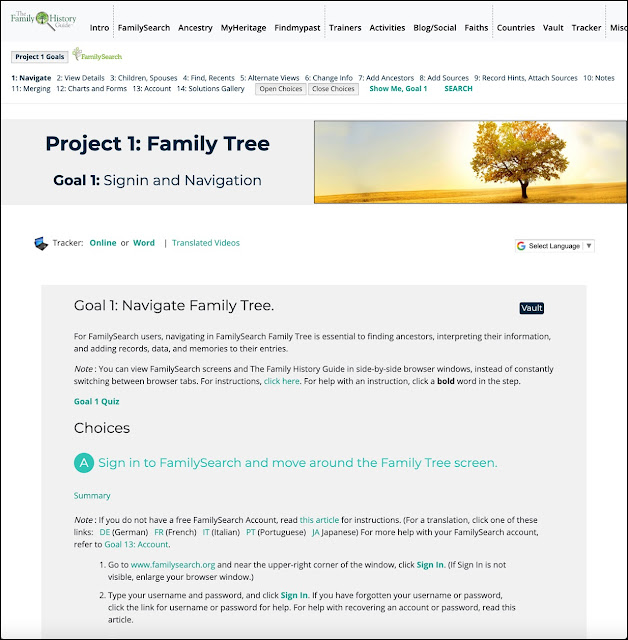 Please take time to explore all of the wonderful resources that are available for research and learning both on the FamilySearch.org website and The Family History Guide website.
Posted by James Tanner at 7:31 AM No comments:

Commentary on the Changes to the FamilySearch Family Tree 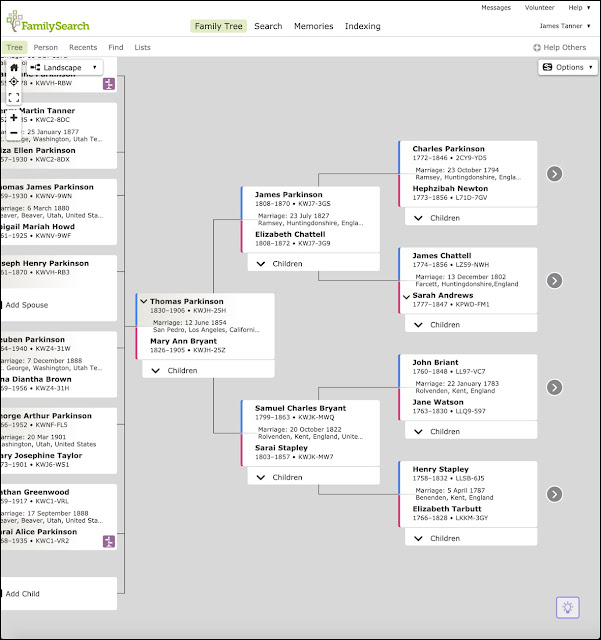 During the past few weeks, I have been tabulating the changes to the FamilySearch.org Family Tree that I have been receiving by email because I watch 302 people. If you want to know all about this process of watching individuals in the Family Tree, please look at the following

Watching individuals in the Family Tree is a basic function of the program that allows you to monitor any and all changes made to anyone you are interested in maintaining. Unfortunately, many people focus on the changes as threats or intrusions rather than as a benefit of the program in including more people and assisting in correcting traditional information about our families. One of the most important factors in decreasing the number and frequency of these changes involves adding supporting sources, stories, photos and other memories. Watching your portion of the Family Tree is the next most important way to see a decrease in the number of changes.

My question was exactly how many of those ill-advised changes I was seeing weekly in the Family Tree were made without providing a source for the information added or removed. After weeks of tabulating the changes, the average settled on a surprising 87%. Yes, 87% of the changes were made without a supporting source. I decided at this point to add a commentary and suspend the review until sometime in the future if the changes continue to be a challenge.

In all, during the time period of the study, there were 81 people with a combined total of 475 significant changes and 394 of those changes were unsupported by any mention of a source. The time involved for one person to check every single change would be overwhelming. The only thing that saved the data from ultimate destruction was that there were a number of people evidently watching these individuals and correcting the unsupported changes.

Unsupported, consequential changes made to the Family Tree are, in fact, a major issue with the future viability of the whole Family Tree project. I cannot see any way that I can measure how many new people were added to the Family Tree during the study period, but I can only assume that the new people are being added with about the same level of lack of supporting documentation.

As I have stated many times in past blog posts, the problem is not with FamilySearch or the Family Tree: the Family Tree is the solution, not the problem. The basic issue is how to maintain a viable and accurate Family Tree and still maintain an open and collaborative structure? As I have also written before, there is a need for a rating system to rate the credibility of any information in the Family Tree similar to the widely used "star" system and there is also a need for some further requirements helping people to realize that a source is necessary for making changes or adding new information. I am thinking that one way this could be accomplished is to mark any information added or change made without a source statement as unreliable. So, if I entered a birth date and failed to reference a source, the entry would be marked with a red exclamation mark and listed as unreliable. The star system could also be extended to listed sources so that researchers could express opinions on their reliability.

There are probably other solutions that could achieve the same results, but there is a real need to get some control over the lop-sided addition of unsupported information.
Posted by James Tanner at 9:22 AM No comments:

Unfortunately, not all those who are working on the FamilySearch.org Family Tree for the purpose of finding ancestors and relatives who need to have their Temple Ordinances performed understand this principle. As a result, FamilySearch has implemented an automatic expiration date that will apply to all ordinances according to the following rules:
See "Expiration of Ordinance Reservations"


Posted by James Tanner at 1:34 AM No comments:

An Analysis of the Weekly Change Reports for the FamilySearch Family Tree: Week Nine 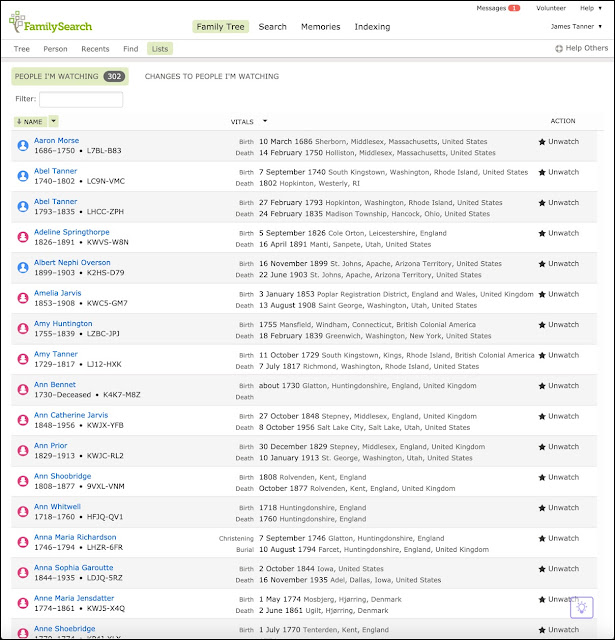 This will be the last in this series of analyzing the Weekly Change Reports from FamilySearch.org about the Family Tree. For the past few weeks, the average number of changes made without any supporting sources has stabilized at about 87%. Anyone working on the Family Tree who has an extensive ancestry, such as one created by pioneer ancestors, should expect about that level of changes every week. If you have basically made your own entries in the Family Tree and do not connect to the huge number of people from New England or other such locations, the number of changes may be far lower. If you are watching people who were born before 1700, you may likely have many more changes than the average. I will be writing a more complete commentary and analysis in the near future.

Here is this weeks compilation. The email message is dated August 3, 2019, so this report adds changes from July 25, 2019, to that date. The most recent changes are in green so you can see which people have consistent changes. 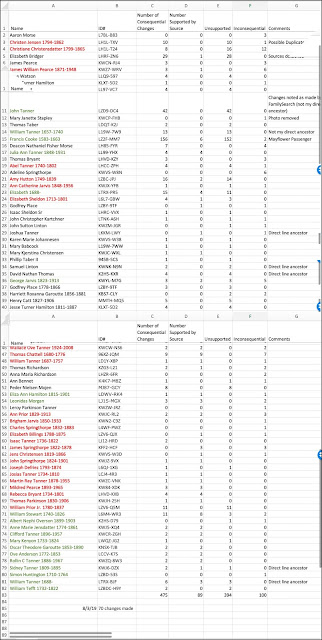 Some out there will probably use this series as a justification for abandoning work on the Family Tree. These will probably be the same people who refuse to plant gardens because they might have to pull weeds. In anticipation of my forthcoming commentary, I would just note that the benefit of having the Family Tree far outweighs the time involved in maintenance.

Stay tuned.
Posted by James Tanner at 9:49 AM No comments: