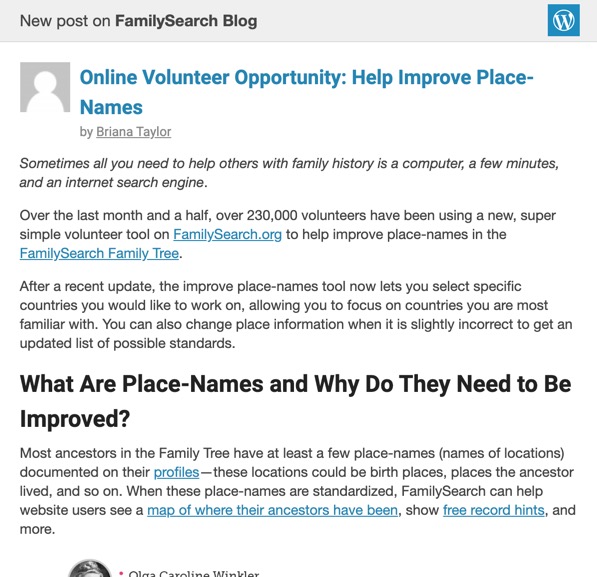 Crowdsourcing can accomplish some tasks that are overwhelming when viewed on a one-by-one basis. The Family Tree is an excellent example of crowdsourcing. Although there is a downside for those people who excessively focus on the changes without understanding the process of correcting information that is inaccurate the overall achievement is adding a huge amount of information in a universally accessible venue.
On the other hand, this idea of looking briefly at a geographic location and then changing it to match a preselected "standard" place is rife with the possibility of error and loss of data. Sadly, geographic knowledge is sadly lacking in many countries and cultures of the world. For example, in my experience helping people in the United States with research around the country and in Great Britain, I have found almost no knowledge of the geography of the United States or England down to the county level not even looking down to the city and town level. Choosing a preselected standard place name has always been an extremely controversial topic in the genealogical community. Software programmers love standards. Researchers find constant place name designations that do not fit in a standard mold.
Here is one example of the variations in the place names for the same location in one family entry in the FamilySearch Family Tree. You might note that Kentucky did not become a state until June 1, 1792. I should also mention that Nicholas County, Kentucky was not created until June 1, 1800. Here is the list.
As a matter of fact, most of these place names are incorrect and I would ask you, as a reader of this blog post, can you tell what is wrong with each entry? Even assuming you read my comments on the dates?
Recently, I have had a situation where a Family Tree user absolutely refused to standardize the place names even when they were exactly the same as suggested standards.
If we move out of the United States, we have so even more complex problems. The place names in Denmark may contain elements of territories, waters, settlements, cultivated areas, streets and roads, houses, farms, and shops, and many other things. Another complication of this naming system is the Danish “Farm Name.” Quoting from Nordic Names:

Farm names were usually added to the given name and the patronym and originally functioned as an address rather than as a surname.

When name laws were introduced in the 19th and early 20th century and hereditary surnames became mandatory, many people decided to keep their farm name as a surname.

In Denmark many people who use a secondary patronym chose to take a farm name as a middle name.

Can someone by looking at the following type of entry make any of the temporal or geographic judgments necessary to have a correct, not just standard, place name? 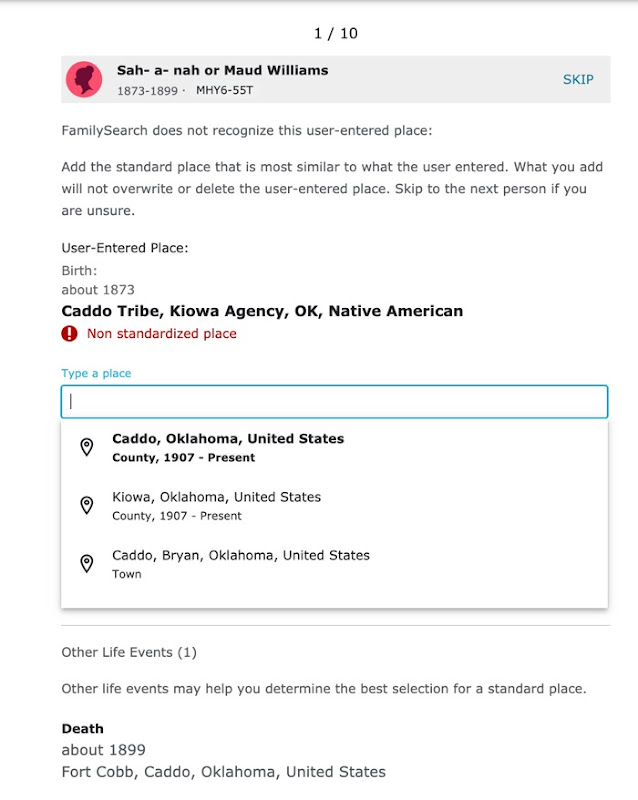 These are the choices offered by the new app that is supposed to standardize the place. Here is a quote about the Caddo Tribe and the Kiowa Agency from the FamilySearch Research Wiki article "Kiowa Indian Agency (Oklahoma)."

The Kiowa Agency [also called: Anadarko Agency, the Kiowa and Comanche Agency, and the Kiowas, Apache, and Comanche Agency] was established in 1864. The tribes assigned to it -- Kiowa, Apache, and Comanche -- had been previously assigned to the Upper Arkansas Agency, and before 1855, to the Upper Platte Agency. Even after the establishment of the Kiowa Agency, it was closely associated with the Upper Platte Agency. The Kiowa Agency also has some responsibility for some Caddo Indians during the Civil War and for some Comanche Indians living in Texas.
There was no fixed location for the Kiowa Agency during its early years. It was supposed to have its headquarters at Fort Larned, Kansas, but due to the nomadic life of the tribes assigned to it, the agent spent most of his time moving about. By the Treaty of Medicine Lodge Creek in 1867, the three tribes agreed to settle in an area south of the Washita River in Indian Territory. An agency headquarters was located on Cache Creek near Fort Sill.
From May 1869 to July 1870, the Wichita Agency was consolidated with the Kiowa Agency, but in 1870, the Wichita Agency again became independent. The two were again consolidated on 1 September 1878 and the combined agency became the Kiowa, Comanche, and Wichita Agency

This discussion continues in the next article, "Kiowa, Comanche, and Wichita Indian Agency (Oklahoma)."

The Kiowa Agency and the Wichita Agency were consolidated 1 September 1878 and became the Kiowa, Comanche, and Wichita Agency. It was still commonly called simply the Kiowa Agency and some of the records are filed under that name. The Agency headquarters for this agency was located at Anadarko, Oklahoma and became the forerunner to the Anadarko Agency

So, where was this person born? Where are the records located is there are any? If a user chooses any one of the standardized places, they are wrong.
This new app will create a massive clean up problem for those standardized entries that lose valuable information.
The common approach to place names views them in a hierarchal order from smallest to largest or most restrictive to most inclusive in the form of “town/township, city, county, state, country.” This simplistic view can readily be shown to be inadequate when you begin to record places in a country such as Denmark. In order to uniquely identify people with the same or very similar names, it is important to understand the origin and development of the Danish place names which take a two-part form.
Quoting from the University of Copenhagen, Names in Denmark, from the Department of Nordic Research, here is a list of common place name types:
• Names in -inge
• Names in -um
• Names in -løse
• Names in -lev
• Names in -sted
• Names in -by
• Names in -toft(e)
• Names in -torp
• Names in -bøl(le)
• Names in -rød
• Names in -tved
• Imperative names
• Abstract names
• Names that look old
To see more information, here is a further quote from the section on “The publication of place-names in Demark.
There is no complete list or database containing all the Danish place-names but the series Danmarks Stednavne, Danske sø- og ånavne and Sydslesvigs Stednavne each cover a large proportion of the country with a thoroughly researched and interpreted corpus of names. The handbook Danske stednavne provides a brief explanation of over 7,000 place-names – first and foremost settlement names – in Denmark.
The place names in Denmark may contain elements of territories, waters, settlements, cultivated areas, streets and roads, houses, farms, and shops, and many other things. Another complication of this naming system is the Danish “Farm Name.” Quoting from Nordic Names:
Farm names were usually added to the given name and the patronym and originally functioned as an address rather than as a surname.
When name laws were introduced in the 19th and early 20th century and hereditary surnames became mandatory, many people decided to keep their farm name as a surname.
In Denmark many people who use a secondary patronym chose to take a farm name as a middle name.
The point of these examples is that naming places is more than designating a series of blank places to fill in with names.
I cannot begin to imagine what will happen to Danish place names with this new program. Here is just one example of a suggested standard for a Danish place. 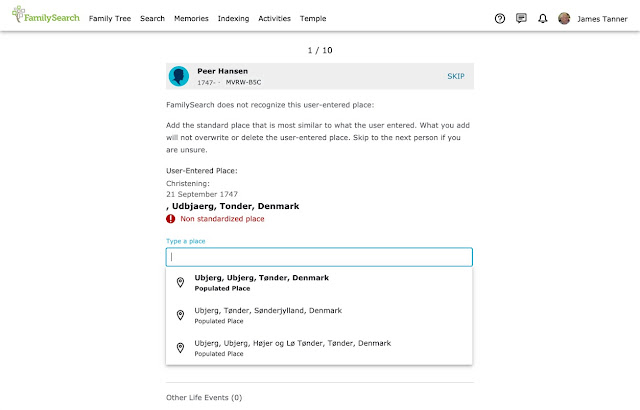 Which of the three suggested places would you choose? What if the information in the non-standard place name is simply wrong? I can go on for pages and pages, but I will leave my further comments for another day.
Posted by James Tanner at 3:14 PM 9 comments:

There have been a number of significant revisions to the FamilySearch.org Family Tree, Temple Ordinance Reservation system. These updates are summarized in a blog post entitled, "Updates to Temple Ordinance Reservations." The list of the featured revisions is as follows:
All of these are linked and explained by this one blog post. At the time of this post, the temples of the Church are closed because of the COVID-19 pandemic so it had been a while since the June 11th announcements and changes. Sorry to be late in bringing this to your attention.
Posted by James Tanner at 5:08 PM No comments: