How will the end of New.FamilySearch.org affect you?

There are some areas of genealogy that give rise to really deep emotional conflicts. I was passing by a patron in the Mesa FamilySearch Library the other day and notice that she was working away on New.FamilySearch.org. I paused and mentioned to her that the program was being discontinued shortly and that she might consider working in FamilySearch.org Family Tree. I was absolutely amazed at the reaction. She all but spit fire at me and told me in no uncertain terms that she was not going to move to a new program. I smiled and moved on. Unfortunately, I have had this same type of reaction from many of the people I interact with at the Library.

What is going on here? Is this just another example of technological paranoia? Or are there some other issues? I think part of the reason for the reaction lies in the type of work people are able to do with New.FamilySearch.org (NFS). At the core of the problem is a lack of accountability to entries and the consequences of entries in the NFS program. My wife was feeling discouraged with the information in FamilySearch.org Family Tree (FSFT) because entries carried over from NFS had so entangled her ancestral families with wrong people and information that it seemed impossible to rectify. But those working with NFS never have to confront these issues. Right or wrong they can just keep adding information to NFS and further qualifying "people" for ordinance word with impunity.

There are those who are looking at NFS for names to take to the Temple who are simply adding variations on existing names, making the program think they are new individuals and not copies and then printing off Family Ordinance Requests. Let me be clear. These people are making up or fabricating bogus individuals simply to acquire cards to take to the Temple. They can do this because NFS lets them do it. I have no idea what motivates someone to do this, but I do know that they feel threatened with FSFT because they guess that it will not be quite so easy to fabricate people in the future. If you want to see what I am talking about, here is a screen shot of one of my family lines. The first screenshot shows the line in NFS: 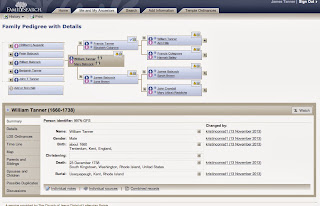 What is happening here is that the ancestor in the primary position is William Tanner of Rhode Island. I have done extensive research on him and his parents have never been identified. The names used as parents are copies of the names of his descendants. The key here is the small shield symbol with the plus sign next to William Tanner and his wife's names. Clicking on that symbol shows the following screen: 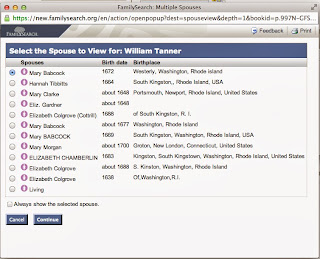 This is one root cause of the animosity against FSFT. This type of wholesale fabrication will no longer be allowed or fostered. I need to mention that the pedigree line (totally fabricated) for William Tanner in NFS extends back another five generations.

Now what happened when this mess transferred over to FSFT?

Here is a screen shot showing the mess as of today. This changes as people keep putting information into NFS so every day is a new adventure. But today we have two generations back past William Tanner (the end of the line) and as yet not one source has been added to William Tanner. I haven't added any sources because I am not sure yet which of the "William Tanners" in the file will end up being the one I need to work with as people get deleted from the file. 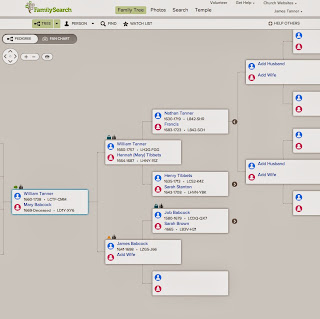 This is one major reason why I have been writing for so long about the need to move on to FSFT and abandon NFS. But I am now concerned that the same people who are fabricating names in NFS will continue to do so in FSFT and cause continual problems with the program.
Posted by James Tanner at 6:43 AM