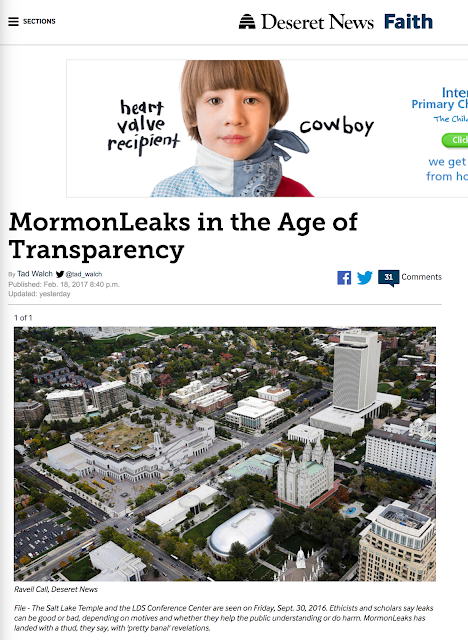 A Deseret News article published on February 18, 2017, entitled, "MormonLeaks in the Age of Transparency" raises some difficult issues that bear directly on the information provided or not provided in the context of online family tree programs and especially the FamilySearch.org Family Tree.

Genealogists have been cautioned to maintain the personal privacy of the "living" while at the same time recognizing that the dead have no privacy claims. In most cases, the "privacy" of the living is partially maintained by online programs that mark living people and prevent the general dissemination of information about those so marked. But beyond this attempt at maintaining privacy, the inclusion or exclusion of any other information is left entirely up to the individual users.

But the core issue for both those who supply "leaked" information and for genealogists generally does not so much involve privacy as it does in providing sources. The online "leaks" websites maintain the governments and other large organizations should be "transparent" in their operations while at the same time claiming confidentiality for their own sources. What's good for the goose is good for the gander. If transparency is a positive virtue then transparency should work both ways. Why do the leaking organizations think that they need to keep their sources confidential? Obviously, for some of the same reasons that organizations, such as The Church of Jesus Christ of Latter-day Saints maintain the privacy of some aspects of their own internal business.

Why does this have anything to do with genealogy? Because we are in the business of acquiring and publishing information. As the article cited above points out about the information being obtained through MormonLeaks:


McKnight won't reveal who is providing the leaks to him other than to say it is more than one person. In fact, he said he doesn't know who they are. News consumers should consider that, said Kirtley, the Minnesota professor of ethics and law.

"If you're interested in the content, then I think how the organization that posted it got it, might become a relevant issue, because how they got it could raise questions about the authenticity of the article, whether the material was being leaked for motives that might tend to skew your perception of what's there. You might for example get part of something that is not really representative of the whole but could be misconstrued. How do you know that if you can't as a reader judge who the source was who provides the material?"

This is the heart of the matter. How do we know if the information provided is reliable or not if we do not have a "source?" Exactly. This is the core issue with genealogy as it is portrayed in online family trees. For example, in my own family line I have a rather vocal "genealogist" who has entered some information about an ancestor without disclosing the origin of the information. The genealogist claims that she hired a "professional genealogist" who supports her conclusions but refuses to provide either the supporting documents or any other documents that might have been used to make the conclusion. The genealogist is, in effect, doing the same thing that is being done by the "Leaks" organizations, claiming that they are above the need to supply information about their sources.

In short, any information provided even in the context of genealogical research, that lacks a citation to the source is suspect and patently unreliable.
Posted by James Tanner at 6:52 AM