When is a Source Not a Source?

I was berated in a comment for my example in a recent post of using a "Family Group Sheet" as a source and attaching it to a family in the FamilySearch.org Family Tree. The comment states.


I am delighted that this feature has been added to FamilySearch/FT; but I worry that the example given used an unsourced family group sheet. That is a sure fire way to promulgate the spread of past errors. The FGS are a great way to point a possible path to new research, but they don't belong as sources in a public tree.

This comment raises an important issue about "sources." Here is the Family Group Sheet or Record in question. 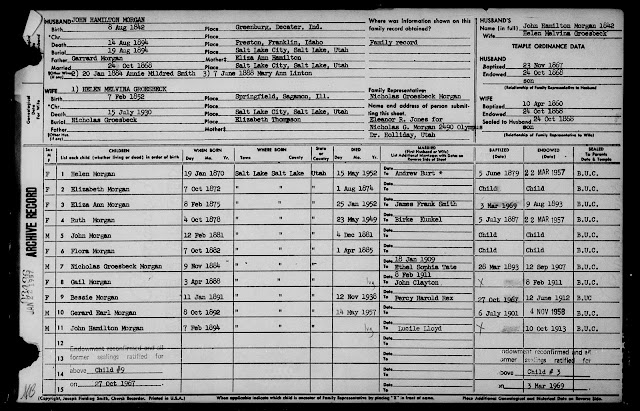 Unfortunately, the blanket argument above about the propriety of attaching this particular Family Group Sheet would also apply to such sources as U.S. Census Records and many other records commonly uses as "sources" genealogists without much discussion. First of all, this sheet was submitted by the son of the person listed as the Husband, so what is the difference between the information in this sheet and what is supplied, unverified and from an unidentified informant for the U.S. Federal Census records? Here, we know who submitted the information. We also have a lot of information that was added at the time the events occurred. The commentator apparently does not realize that there is primary data on this Family Group Sheet such as baptism and other church related dates. The information supplied here is the functional equivalent of a Bible record or a diary or journal.

One piece of information supplied is crucial to my family line: that is the date of John Morgan's marriage to Mary Ann Linton, my Great-grandmother. It took some very extensive research to acquire a marriage record for this couple for some rather interesting historical reasons involving plural marriage in the early history of The Church of Jesus Christ of Latter-day Saints.

Granted, some of the information may not be accurate, but that is the case with all historical records. If the commentator had taken the time to review the record, it would have been evident that the person submitting the record has listed his own birth and marriage information. The commentation might also be unaware that Nicholas Grossbeck Morgan, who is the Family Representative and responsible for the information wrote the following book about his father John Morgan which is widely cited as a "source" by many family members.


Richardson, Arthur M, and Nicholas G Morgan. The Life and Ministry of John Morgan: For a Wise and Glorious Purpose. Place of publication not identified: N.G. Morgan, 1965.

Lastly, I might point out that some Family Group Records are extensively documented with other sources. The comment looks like to me another example of throwing the baby out with the bath water.  Do I have an obligation to check the information contained on this record? Yes, I have exactly the same obligation I have with any other record I find. I need to research broadly. I might point out that we have only 26 source listed on the read only record for John Hamilton Morgan. There would be a lot more if the record were not read only and because the record is read only, this Family Group Record was not attached to John Morgan.

Oh dear, I do have one more comment. There is no documentation for the fact that John Morgan had the middle name of Hamilton. One of his sons had the name John Hamilton Morgan, but he is not recorded as using a middle name.