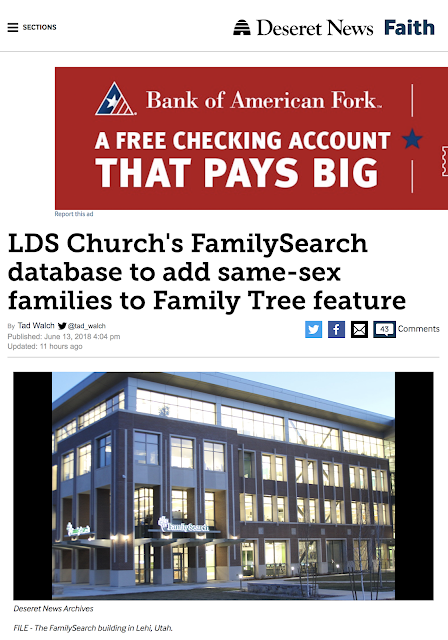 Headlines in the Deseret News report the following in an article dated June 13, 2018:

FamilySearch first said in 2015 it would add a feature for same-sex relationships in the future. The major overhaul to the website's system should be ready by 2019, according to a statement on the website updated in April.

The statement said FamilySearch.org's goal is to capture accurate genealogy "that represents past, present and future families of the world."

FamilySearch International is a nonprofit, volunteer-driven organization sponsored by The Church of Jesus Christ of Latter-day Saints.

The leader of a group that seeks equal rights and protections for lesbian, gay, bisexual and transgender Utahns and their families hailed the changes to FamilySearch.

As pointed out in the statement, this is not really "new" news.  Some of the online family tree programs have designated all marital relationships as "marital partners" for some years now. The FamilySearch.org Family Tree program already allows entering relationships without requiring a formal marriage date.
Posted by James Tanner at 3:54 AM