Whittling Away at the Free Partner Access Programs and Other Problems 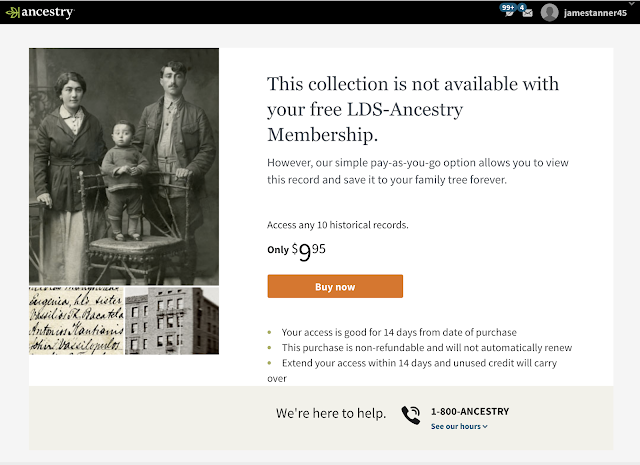 What is there about the word "free" that I don't understand? Hmm. It looks like to me that some of the FamilySearch partners are deciding that some content is not part of the agreement or never was. I certainly understand that as these large online websites negotiate agreements with record repositories around the world that they may encounter some non-negotiable restrictions on the content and their ability to provide "free" access. The basic issue here is monetization of genealogically significant records.

I recently wrote a short post about Reclaim the Records. See "Reclaim The Records Challenges the New York Department of Health Over Ancestry.com Priority." If you go to their website and read the "case studies" about the various records that were withheld by government agencies, you will begin to see the problem. The basic issue is whether or not someone or some entity can "own" records that contain information about us or about our ancestral families. For example, who owns your birth record?

There is a second issue that is raised by the lawsuit discussed in the Reclaim the Records post above. That is can a third-party, some entity that was not part of originating the records and is not the person or family named in the record gain some kind of interest in the record by payment or otherwise that entitles them to charge a fee to view or copy the record? For example, when I was born, the state of Utah created a "birth certificate." I did not ask them to do this. I did not consent to them obtaining the information about my birth. All of that was done by people who did not consult me as to whether I wanted a birth certificate or not. To add insult to injury, I was totally incapacitated at the time. I could not speak, read, or write. Now, 70+ years later, if I want to obtain a copy of the information they obtained without my knowledge or permission, I have to pay the State of Utah a fee. What is more, they can "sell" my information to a third party such as Ancestry.com and then I will have to subscribe to Ancestry's website to see my own birth certificate.

OK, since I was a baby at the time, my parents acted for me as my parents. But essentially, any rights I had to my own information was given away at the time I was born. So now, I have no right to even view my own birth certificate without paying either the State of Utah or some other entity.

Let's take this one step further. Who owns my parents' records or information? Many genealogists think they own the information in their genealogy files? What if I want to obtain a birth certificate of my own father or mother? In almost every state of the United States, with the possible exception of Arizona, I would have to pay to obtain that information.

This is not just an issue in the United States, this is a worldwide issue. In fact, some countries and other quasi-governmental entities are increasingly making obtaining genealogically important information more difficult and more expensive. The reasons given for this action include privacy and ownership interests. Of course, the issue is much broader than our narrow genealogical interest. The real issue is the monetization of information on social network programs.

One interesting part of this issue is that the United States has Federal and State Freedom of Information Acts that require the governments to give their constituents access to certain types of records some of which have genealogical significance. Now comes the question. Can these governments "sell" that information to a third-party who then sells it to the public?

There are costs involved with obtaining and maintaining all records. Who pays for those costs? If I pay to obtain a record shouldn't I be able to charge to access the record to recoup my costs?

I am sure you will see more from me on these issues.