I started this series by investigating an apparent duplicate entry in the FamilySearch.org Family Tree. Here is the first post in this series.

As I mentioned in the first post, I am using some specific (and very complicated) examples from the Family Tree to illustrate some general principles. I will be augmenting the discussion of the problem with periodic "Research Notes" about the basic concepts used in solving the issues raised by the content of the Family Tree.

There is an extensive comment attached to the first post that explores the issues of the addition of International Genealogical Index (IGI) records to entries in the Family Tree. The Commentator, Gordon Collett, has explained some of the difficulties in dealing with this type of entry. I strongly suggest reviewing his entire sequence of comments on this subject. I will come back to the issue of the IGI sources that have been added to the Family Tree. I have also written about this issue in the past.

Now, that said, we are back to the issue of John Sanderson. 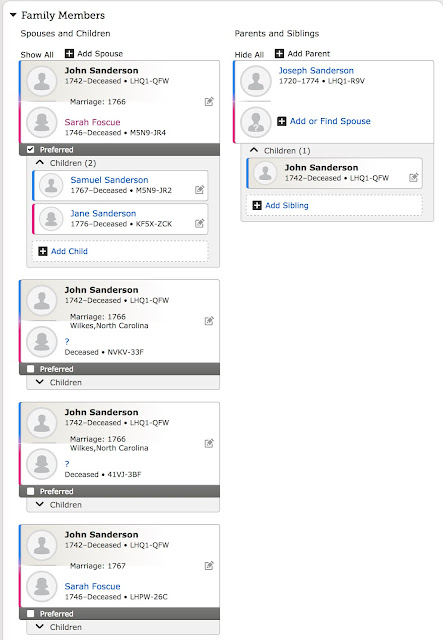 The particular mess addressed by this series of posts does not directly involve an incorrect IGI merge between two of the wrong people The question here involves relationships that are not accurately depicted. I started with the apparent duplicate for Sarah Sanderson. So I am going to backtrack to start the investigation at the point where I know the information is correct. Here is the entry for Sarah Sanderson. By the way, since everyone can view any dead person in the Family Tree, if you are interested, you can take a look at the entries yourself. 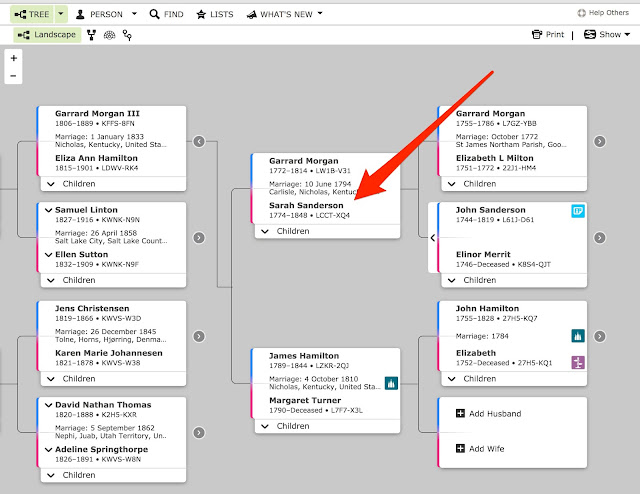 Sarah Sanderson LCCT-XQ4 is shown as the wife of Garrad Morgan LW1B-V31. The Morgans here involve a sequence of three "Garrard Morgans" that have been arbitrarily designated as Garrard Morgan I, II, and III. My daughter has been doing some intensive research on the Morgan line and has added the sources that have been found so far, which, by the way, do not include any sources showing that this Garrad Morgan married Sarah Sanderson. Even though the traditional information added to the Family Tree shows a specific marriage date, there is not yet one source showing where that information was found.

So, any question involving Sarah Sanderson revolves around the issue of substantiating whether or not she is correctly recorded as the wife of Garrard Morgan LW1B-V31.

RESEARCH NOTE: Any time there is a question about the origin of an individual, a competent researcher is forced to backtrack, i.e. come forward in time, until there is an adequate substantiated basis for the relationships displayed in the Family Tree (or any other family tree). In this case, doing further research to resolve the apparent duplication of Sarah Sanderson cannot really be resolved until there is some support for the assumption that she was the wife of Garrard Morgan (previously designated II) The only reference to a source refers to the following book:


Richardson, Arthur M, and Nicholas G Morgan. The Life and Ministry of John Morgan: For a Wise and Glorious Purpose. Place of publication not identified: N.G. Morgan, 1965. https://dcms.lds.org/delivery/DeliveryManagerServlet?dps_pid=IE220954&from=fhd&

The book contains no sources for the assertion that Garrard Morgan married Sarah Sanderson or that Sarah Sanderson was from South Carolina. See page 3 of the above book. Later, in the same book, we have the statement on page 588 as follows:


Garrard Morgan II migrated to Nicholas County near Carlisle, Kentucky; met and married a young lady, Sarah Sanderson, who was a sister or daughter of John Sanderson. This family took up land in that county in 1801 on Licking Creek. There were many Sandersons, Morgans and Woodsons in Goochland and Cumberland Counties, Virginia and Sarah was one of the Sandersons of that county.

Now, you might have noticed, but probably not, that page 5 of the book says Sarah Sanderson came from South Carolina and that page 588 of the same book says she was from Virginia. In the Family Tree, the Sanderson family (except Sarah) is from North Carolina.

RESEARCH NOTE: You can't build a bridge from the middle of the river. You need to make sure you are researching the right person and the right line before you spend your time "correcting" the entries in the Family Tree or any family tree. In this case, there is absolutely no support for the conclusion that Sarah Sanderson is a daughter of a couple who were born and married in North Carolina.

So how is this problem solved? Essentially, we start the research on finding a source or sources showing that Garrard Morgan married someone named Sarah Sanderson and then we do more research to determine who she was. This illustration shows how a supposed conflict or duplicate in one entry can lead to an examination of an entire pedigree line. Basically, we have documentation showing the Morgans in Goochland County, Virginia (which also included Kentucky as a county until Kentucky became a state in 1792) and so any documentation will likely be found in Virginia not North or South Carolina.

Stay tuned for more.
Posted by James Tanner at 9:05 AM