I started this series by investigating an apparent duplicate entry in the FamilySearch.org Family Tree. Here are the first posts in this series.

I could choose just about any of my lines in the FamilySearch.org Family Tree for examples where relationships need to be corrected. In this case, I chose to examine the Sanderson line for the simple reason that the relationship problems were fundamental research issues and not just a simple adding in of a wrong person to a family. The Family Tree provides more than adequate tools for resolving these issues but that does not mean that the process is either simple or that the problems caused by wrong relationships are easy to resolve.

This morning we were greeted by the fact that someone had added in three "new" children to my Great-grandfather Henry Martin Tanner's family. A few minutes of examination showed that all three children were duplicates of Henry's grandchildren in the Rogers family. The person who added the three children probably "heard" that these new entries were "Tanners" but didn't bother to examine any of the dozens of existing sources about the family or provide any sources supporting the changes made. I liken these minor changes to weeds in a garden. You may get frustrated with the weeds, but they keep coming back no matter how much weeding you do.

The problems with the Sanderson family are much more complicated and fundamental than simply pulling out a Family Tree weed. The origin of the problems lies many years in the past with generalized and entirely unsupported speculations included in printed family surname books about my Morgan family relatives and their ancestors. The contents of those books have been repeated so many times that they are now codified and have obtained the status of scripture. But the plain truth is that they are fabrications and fiction. This departure from reality occurs with the traditional family line with Garrard Morgan (usually designated as Roman Numeral II) and a marriage to someone named Sarah Sanderson. 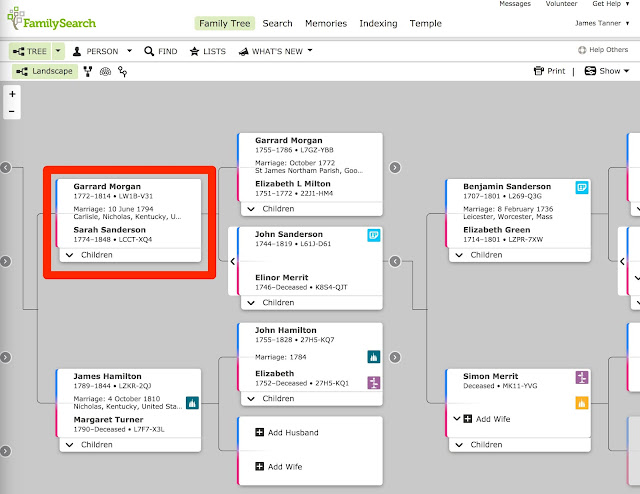 The Sanderson line on the Family Tree goes back 22 additional generations to about 1100 A.D. Unfortunately, there are no known sources showing the name of this particular Garrard Morgan's wife. I suggest that every one of these "extended" lines on the Family Tree need to be carefully examined and I suspect that at some point each of these lines will have to be "pruned" off of the Family Tree.

By the way, this "pruning" activity does not have to "prove" that all the entries attached are "wrong," all that really has to happen is to discover whether or not the one crucial connection is correct. Looking at the Sanderson line above, if Sarah Sanderson is not the wife of Garrard Morgan then the extended "Sanderson line" disappears from my part of the Family Tree. The line still exists and can show up attached to some other person, but in that case, the line has to be reevaluated and it may be pruned off again and again.

In this case, Garrard Morgan and Sarah Sanderson were supposed to have a son named "John Sanderson Morgan." Unfortunately, there is currently no documentation shown that the son's middle name was "Sanderson." There are several entries that his name was "John S. Morgan" but the connection to the Sandersons is not documented. This is the type of analysis that must be done over and over again to correct the entries and ultimately the relationships shown in the Family Tree.