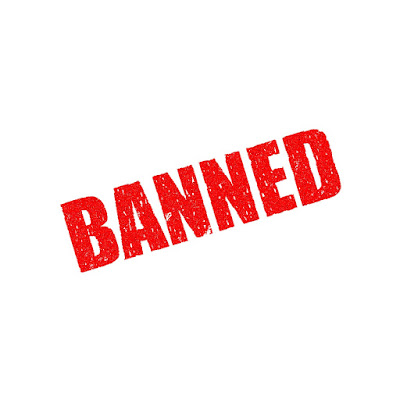 Apparently, all it takes to get banned from Facebook is to write an inoffensive genealogy blog oriented to The Church of Jesus Christ of Latter-day Saints.  Not only is this blog banned from posting, but you also can't even put the URL into a comment or post. Here is the notice.

The Community Standards include authenticity, safety, privacy, and dignity. See https://www.facebook.com/communitystandards/. Contrary to these standards, I was not warned and further, I have no idea what there is about my blog posts that violates any one of the standards.

I am somewhat honored to be classified in the same category as Mark Twain (Samuel Clemens) and other great banned authors but at least when they ban Tom Sawyer or Huckleberry Finn I can guess the reason.  I guess I could speculate that FamilySearch got tired of me posting about RootsTech or whatever, but having the blog banned puts me into an interesting group of writers considering the content I frequently see on Facebook. I realize that someone who did not care for genealogy or the Church could have complained and started this process but I would hope that someone at Facebook would at least review the decision to ban me without notice and yes, I have responded several times that I find nothing in my blog posts that even closely approaches offensive.

I guess I can join the ranks of my ancestors who were persecuted, mobbed, and forced to leave the United States under threat of death for their beliefs. Although I can hardly take Facebook that seriously. By the way, so far, I can keep posting on Twitter, LinkedIn, Pinterest, and my blogs are still being posted right here.
Posted by James Tanner at 10:39 AM