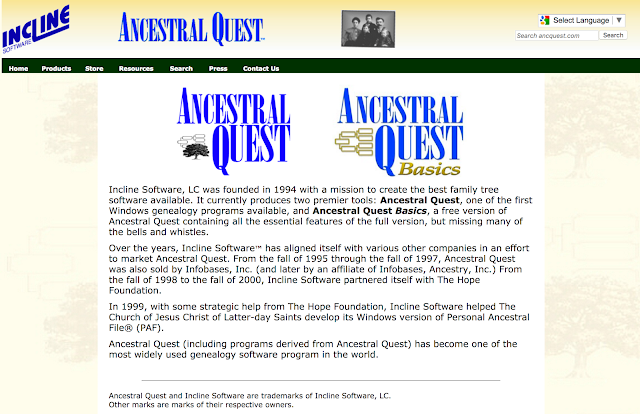 Ancestral Quest has recently been upgraded to Version 15 and several major features have been added including the ability to upload and download Memories from FamilySearch.org's Memories program.

I am continually surprised at the reticence of some genealogists to recognize that all their PAF-based data may end up being lost either through hardware issues or through operating system incompatibility. All of this in the face of the availability of a complete solution for the cost of a program that continues to be sold for $29.95 and with an upgrade cost of only $19.95. In addition, the program is available on both Mac and Windows operating systems.

I was talking to a patron just this past week at the Brigham Young University Family History Library who was telling me in no uncertain terms about the advantages of using Personal Ancestral File and why he will never change programs. At the same time as I was listening to this explanation, we were standing in a major, world-class library with a huge collection of highly sophisticated electronic equipment only a few feet away none of which would be of use at all to the PAF program. In fact, PAF did not even support attaching photos to individuals at all and image files would be too unimaginably large to fit on the floppy disk storage that was current at the time the program was abandoned.

If you do not want to maintain your PAF file as a PAF file, you can import that same information, in the form of a GEDCOM file into many other of the current programs available. If you do, you will not likely be able to go backward without losing a significant amount of the new data and features allowed by the newer programs. But this new version of Ancestral Quest just points out that we are constantly moving further and further away from the now archaic world of PAF.
Posted by James Tanner at 5:09 AM