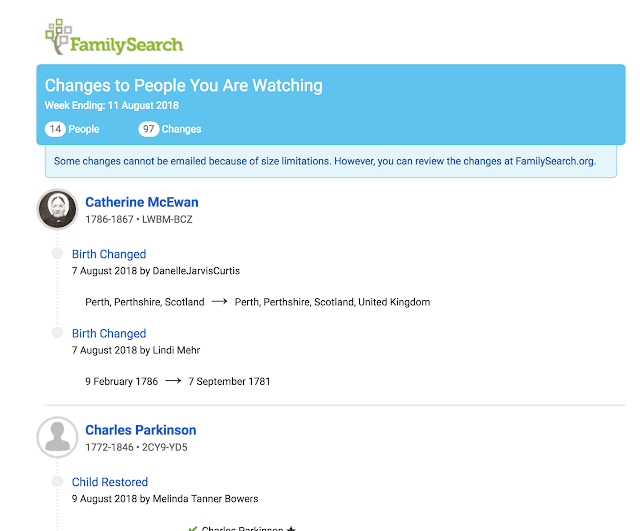 As many of us are aware, if we "Watch" individuals in the FamilySearch.org Family Tree, we will receive an email notification from FamilySearch once a week showing us all the changes that have been made. This week I was notified of 14 people changed with 97 changes. Nearly all those changes had to be corrected or reversed. Here is one example that I have been following and writing about for some time. 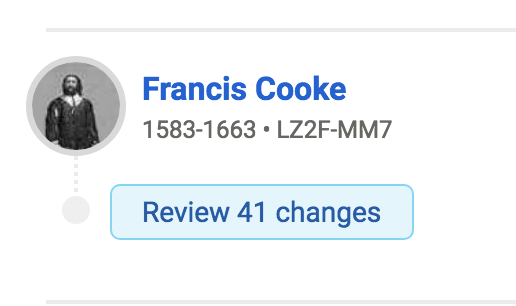 The changes involved adding parents with this result. 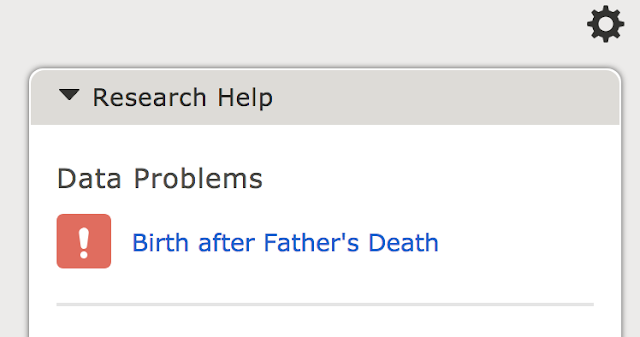 Francis Cooke has 52 Memories and 57 Sources. The last sources were added in 2017. One of the first sources listed is the following: 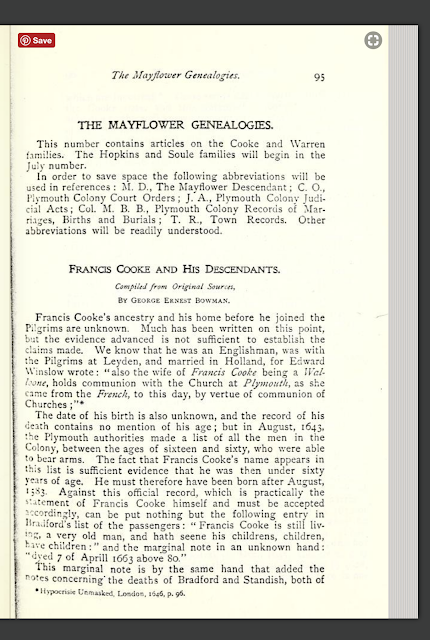 This is from The Mayflower descendant: a quarterly magazine of Pilgrim genealogy and history, by the Massachusetts Society of Mayflower Descendants for 1899, Volume 3. The first line of this article states:


Francis Cook's ancestry and his home before he joined the Pilgrims are unknown.


His ancestry is unknown and there are no records of the time found regarding his birth.

If this person who added parents to the Family Tree had read anything at all about his "ancestor," he would know that there are no known parents.

The vast majority of the inaccurate changes to the Family Tree come from this type of negligence and lack of involvement. Additionally, the same people with some of the same changes show up every week, week after week. For example, here is another change made from this week.

John Tanner KWJ1-K2F has 236 Memories and 93 sources in the Family Tree. If someone is a descendant of John Tanner, they usually know about their relationship. In fact, we met a couple of young people yesterday and they recognized us as missionaries and one of them said that he was a descendant of John Tanner. By the way, he barely knew the name. But here, time after time, without adding any more sources, people add a "Pardon Tanner" as a son of John Tanner and his wife Lydia Stewart Tanner. Here is the statement my daughter Amy Tanner Thiriot wrote to the person who added the child.

Reason This Relationship Was Deleted

There is no reliable or trustworthy source documenting that John Tanner (KWJ1-K2F) and Lydia Stewart Tanner (LC3X-WJ5) had a son named Pardon.

RonT provided a copy of the family bible in John Tanner's Memories section. The family bible lists Lydia's children as: William, Mathilda, Willard, Sidney, John Joshua, Romela, Nathan, Edward, Edwin, Maria Loisa, Martan Henery, and Albert. (All spellings from the record.) Lists of the family from the 19th and early 20th centuries do not mention a child named Pardon, and sources within the family state that John and Lydia had twelve children.

I don't know who first speculated that John and Lydia had a son named Pardon. A Pardon Tanner was sealed as a child to John Tanner and Lydia Stewart on September 2, 1975 in the Logan Utah LDS Temple. I have never seen a valid reason for anyone doing that. No one has ever provided documentation. The family temple work done in the late 1800s does not include Pardon.

Until someone can provide an actual reliable document from the nineteenth century (burial or church record) showing his existence that proves that he is the son of John and Lydia and not of Joshua and Thankful or William and Lydia or Elizabeth and Newman, please do not add him to the family.

We will not give up correcting the entries. But I will probably not find time to look at every single entry that changes every week. I do review the changes and appreciate the help of my daughters in keeping the changes under control.


READ THE SOURCES AND LOOK AT ALL THE MEMORIES

If you think you can outlast the Tanners, you are mistaken.
Posted by James Tanner at 5:24 AM