Some of the common artifacts left over from 150 years of accumulated family history submissions to The Church of Jesus Christ of Latter-day Saints (and all their various subdivisions and associated organizations) that show up in the FamilySearch.org Family Tree are some strange entries labeled as "Birth Name." Here is a screenshot of an example from one of the people in my own ancestral lines: 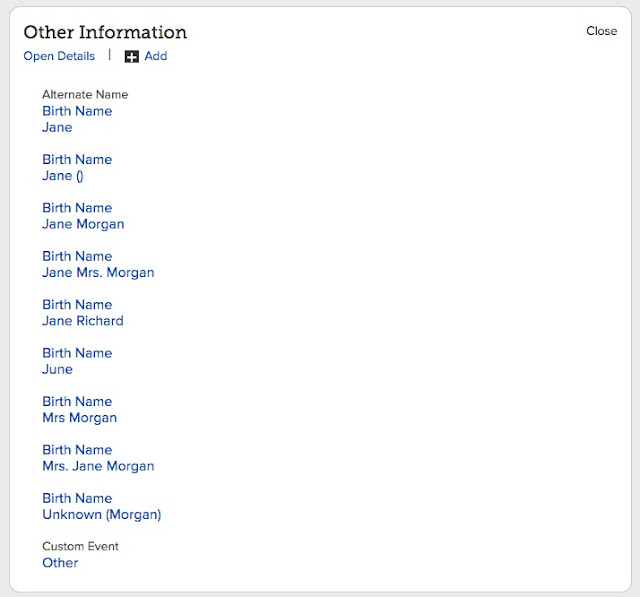 Many users of the Family Tree are baffled by these names and assume that because they are a legacy of FamilySearch, therefore there is some reason they are there and they should be preserved. Others view them as a burden that forces them to research the real birth name of the individual and spend a huge amount of unproductive time. Yet another reaction to this list is that the list is ignored completely. Where did these "Birth Name" entries come from and why do they appear in the Family Tree?

Over the years, as people submitted names to the Church (Genealogical Society of Utah, etc.) there were, of course, variations in the way that people were identified. After many years of submissions, much of that accumulated work was included in the new.FamilySearch.org program. There were a myriad of duplicates. Unfortunately, many of the entries, even though they were duplicates, had slightly different to significantly different names for the person submitted. What you see above is a summary of the differences in the way the name of this person were submitted. Some people have only one or two variations, some have dozens.

Because the information in the new.FamilySearch.org program was all essentially moved over into the Family Tree, these names showed up. Because they were submitted as the "primary" name of the ancestor, they are designated as "Birth Names" even though most of them are obviously wrong.

The main entry for each individual should reflect that person's name as it is shown on the earliest document or record recorded for that individual. If there is a record of the birth, then this is the name given at birth. This name should be entered as the main name of the individual in the "Vital Information" section. For example, supposing that the only record of a person is a burial record. Since that is the only record, the name shown on the burial record becomes the primary name recorded in the Vital Information section. If a different, earlier name is discovered, it should take the place of the later recorded name. 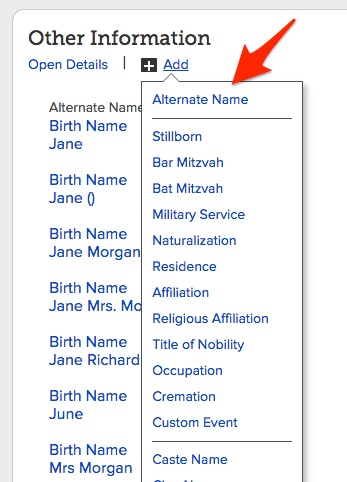 The Alternate Name  option gives you several choices for categorizing the name in a pull-down menu. 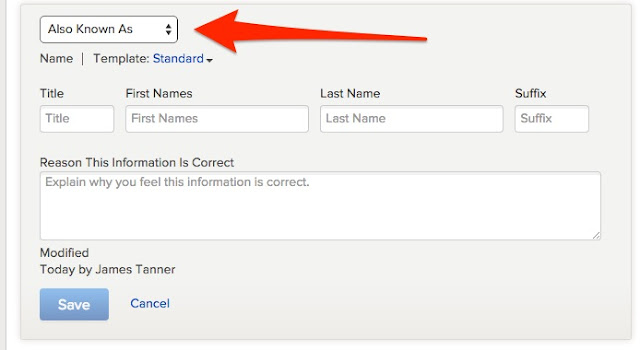 
It is possible that a person may have had more than one name recorded in birth records but this is fairly uncommon. The source of any name variations should be recorded.

What do we do about the list of alternate birth names, especially those that are obvious errors? They fall into one or more of three categories. They are either:
Let's look at the list of names for Jeane Cheverill shown above:


I suggest that all of the wrong or married or whatever names need to be deleted so that there is no unnecessary confusion over the birth name. It would be nice if there was even one source for this person's identity that would help us decide if any of the other variations need to be preserved. Be sure and add a detailed reason for deleting the names if that is appropriate.