In the first part of this series, I used one of my own ancestors in the FamilySearch.org Family Tree as an example of the common areas of concern. These are areas that need to be "cleaned up" because the overall accuracy of the Family Tree entries rely completely on the accuracy of each individual entry.

The Morgan line I choose for my example has been "researched" for over 100 years. Here is the couple in the Morgan line I am using as an example of the issues of concern: 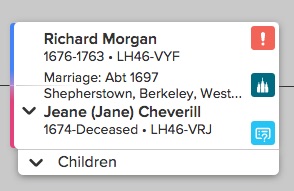 Note the red exclamation point warning on this couple.

FamilySearch.org has provided us with warnings about the information in our ancestral lines. Most of these warnings have to do with one important aspect of family history: do the math! This means that you need to be aware of the effect of putting dates and other numbers into the Family Tree. The example above is exactly on point here. The information in the Family Tree has Jeane Cheverill born in about 1674, however, if we go to the list of her attributed children, we see the following:

This list is a problem in itself, as I pointed out previously. The last child was supposedly born when Jeane Cheverill was 71 years old. But we need to go to the husband's entries to see further problems. Here is a screenshot of the husband, Richard Morgan, (b. 1676, d. 1763).

Richard Morgan has three more wives. Notwithstanding his marriage to Jeane Cherverill that lasted until she was 71 years old, he supposedly had three other wives. This one Jane Taylor, had her first child fourteen years after her marriage. Of course, she was married when she was five years old and her husband had to wait until she was nineteen before they had their first child. My, this is an interesting early American family! Of course, this is only the start, Richard Morgan's fourth wife, Unknown, had eleven children starting in 1712 and ending up in sometime after 1732 when Richard, himself, was 56 years old. In any event, he is supposed to have lived to be 87 years old.

The point here should be obvious. We all need to be careful that what we enter into the Family Tree makes some sort-of sense when you look at the dates events were supposed to happen.

For this concern, we are back to Jeane Cheverill. I have already mentioned the problem of dates, but next we need to look at the issue of the children. Jeane's children are listed as follows:


What is wrong with this list? Pretty much everything. Even if we ignore the age of the mother, we see that the first child was supposedly born 45 years before the last child. Look at the dates here. We are in the early 1700s. In the early 1700s, the average person lived to be about 36 years of age.

Another issue, from a family history standpoint, is the gap between the children. The largest gap is twenty years between Sarah born in 1712 and William born in the 1732. This suggests that William and his brother Abel were not the children of Jeane Cheverill and Richard Morgan. There is a need here for much more research about this family.

There are no sources attached to this family at all. There is not one place we can go to see how all of these marriages and children were discovered. Without documentation, we must assume that all of the information is subject to serious question. This means the names, the dates, the relationships, the children, the places, every last item recorded here is subject to serious concern.

Despite all of these problems and concerns set forth in the first eight examples, this pedigree extends indefinitely into the past. 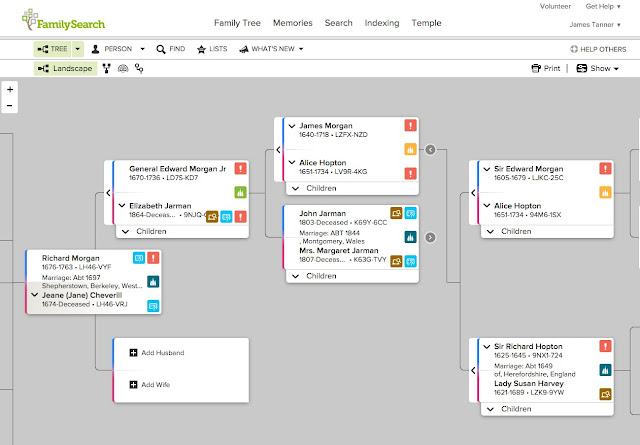 In addition, there are extensive data problems as indicated by the red icons at every generation of the extended pedigree. Notwithstanding all of these problems, temple ordinances have been performed for the families and all of the marriages and individuals included at every level. Perhaps we need to think about what we are doing when we blindly start listing people as ancestors.

This is far from the last of my concerns, but this list had to end somewhere. In this case, I merely extended out this Morgan line to its ultimate conclusion. So, despite all the problems and despite the fact that there was no documentation at all at most of the levels, this pedigree goes back to an Edward Morgan, born in 1600 in Llantamin Abby, Monmouth, Wales, United Kingdom. Interesting that the line ends with Edward Morgan whose son, Edward was born when he was five years old. Here is a quote from Wikipedia about the Llantamin Abby:


It was founded as a daughter house of Strata Florida Abbey, Ceredigion, in 1179. After its dissolution in 1558, it was used as a private residence, being initially acquired and rebuilt by a local landowner. William Morgan of Llantarnam (Lanternam in some old documents) bought the abbey in 1561 and the family became great landowners in Monmouthshire around this time.

Sir Edward Morgan, 1st Baronet of Llantarnam (died 24 June 1653) was a Roman Catholic supporter of Charles I during the Bishops' War and the English Civil War. Charles created him a baronet in recognition of his services, but his capture during the English Civil War led to his estate being sequestered. Morgan was one of the Morgan family of Llantarnam in Monmouthshire, Wales, an established Roman Catholic family: his great-grandfather William Morgan was a MP in the reigns not only of the Catholic Queen Mary but also of the Protestant Queen Elizabeth, and allowed his house to be used for the celebration of mass. Morgan's parents were Thomas Morgan and Frances, daughter of Edward Somerset, 4th Earl of Worcester, and both supported Catholic activities in Wales. He was educated at Jesus College, Oxford, matriculating in 1616 and obtaining his Bachelor of Arts degree in 1619. He was involved in the Welsh Jesuit headquarters being set up in 1635 in Cwm,Herefordshire. He was commissioned in the second Bishops' War in 1640 and given permission to obtain contributions from fellow-Catholics. This caused controversy in the Long Parliament, and Charles I's reaction was to make Morgan a Baronet in 1642; he later renewed Morgan's commission during the English Civil War. Morgan was captured at Hereford on 18 December 1645. The Rump Parliament removed his baronetcy and his estate was sequestered. He died on 24 June 1653; it was not until 9 November 1654 that his estate was discharged. His heir, Sir Edward Morgan Jr., 2nd Baronet of Llantarnam, became a Protestant. The Baronet title fell to his son Sir Edward Morgan III., 3rd Baronet of Llantarnam until his death, he was without male heirs and the Baronet title then went to his uncle: Sir James Morgan., 4th Baronet of Llantarnam, James was the younger son of Sir Edward Morgan., 1st Baronet of Llantarnam and was the last Baronet of Llantarnam, as his surviving heirs immigrated to America.

Hmm, make me think it is time to go back down the line and see where this connection is made.

The first part of this series is here:

http://rejoiceandbeexceedingglad.blogspot.com/2015/06/ten-common-areas-of-concern-on.html
Posted by James Tanner at 8:55 AM