Since they look redundant, I'm inclined to remove them, but if there's some sort of automated process that adds them, this feels like not making much sense, because then I would be fighting a computer program. Any idea what to do? Can they be results of data moving over that doesn't show as a merge, because it isn't a merge, technically?

The answer to this question and the associated issues is quite complex. Yes, there is an "automated process" that adds them into the FamilySearch.org Family Tree. Here is another example of the "Birth Name" list for one of my ancestors. 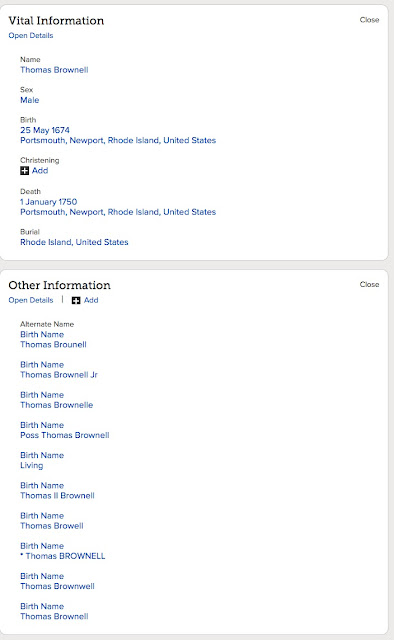 Some of these variations may actually be Alternative Names, but the question is this: What was this person called on the earliest record available? If there is some sort of birth record, then that is the name that needs to be entered. If there is some sort of later record, the earliest recorded name is the proper one to record. It might also help to find a document where the person recorded their own name (assuming they could read and/or write).

As I have written previously, this list of names is a reflection of the historical submissions of this person as shown in the FamilySearch files. These submissions include the Ancestral File, the International Genealogical Index, the Pedigree Resource File, the membership records of The Church of Jesus Christ of Latter-day Saints and the Church's temple records.

In some cases, not shown above, this list might indicate a wrongly combined individual from new.FamilySearch.org. In the case above, all of the names seem to be variations on the spelling of the primary name in the Vital Information area.

What is the significance of an indication that there are one or more wrongly combined records? First of all, you should not be asking this question unless and until you have documented your family line back to this person (or the person with the list containing a suggested wrongful combination). If we need an example of wrongfully combined individuals that create a problem, all we have to do on this line is go to Thomas Brownell's wife, Esther. At this point is is important to understand this is one of the most documents lines in my entire pedigree because this is the line I have documented back to the Mayflower passengers. However, the current status of the Family Tree would not seem to indicate this connection. Here is a screenshot of the issue: 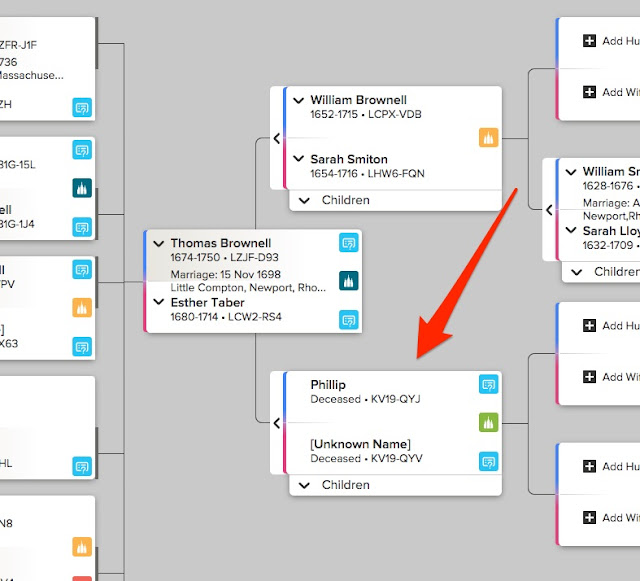 In this particular case, there multiple copies of this same individual with multiple copies of his wife and children. There are nine different sets of parents for Esther Taber. What can we do with all these copies? All of the descendants of these individuals need to be "cleaned up" before we address this issue. If we look at Esther Taber's husband Thomas Brownell we see the following list of "Birth
Names:"
The variations here need to be resolved before we address the problems with Phillip Taber. In fact, it would be necessary to go back several generations before the individuals were settled enough to attempt to make changes. In my case on these lines, I am waiting for the Family Tree to "settle down" a bit before I tackle these obvious errors.

Unless we clear up the earlier generations first, we risk losing all of our work due to choosing the wrong alternate line to work on.
Posted by James Tanner at 2:28 PM