A bit of history. I start with an explanation of the International Genealogical Index or IGI. Here is part of the article from the FamilySearch Research Wiki on the IGI:


The International Genealogical Index (IGI) is a computer file created by The Church of Jesus Christ of Latter-day Saints. It was first published in 1973 and continued to grow through December 2008. It contains several hundred million entries, each recording one event, such as a birth, baptism (christening), marriage, or death.

Information in the IGI came from two sources:

1. Some of the entries in the IGI were indexed by the genealogical community from collections of vital and church records (approx. 460 million names). Indexed records are valuable sources of primary information. Unfortunately, attempts to prevent duplication resulted in the exclusion of some indexed records.

2. Some of the information in the IGI was contributed by members of the Church about their ancestors (approx. 430 million names). The quality of this information varies. Duplicate entries and inconsistent information are common. Always verify contributed entries against sources of primary information.

When the new.FamilySearch.org program (NFS) was created, records from the IGI were used to create the original database. Unfortunately, many of the limitations in the IGI records were "passed on" to some extent to the NFS program. Again quoting from the FamilySearch Research Wiki article:


Limitations
The International Genealogical Index is a finding aid. Always check original sources. Entries often do not contain all the information in the original records, such as death dates or names of additional relatives. Sometimes only portions of parish records or other sources were indexed.

Today’s implementation of the International Genealogical Index addresses key deficiencies in the previous implementation. However, it is not able to correct all of them.

1. Previously, the IGI could not be searched by city or parish name, but only by country and one subdivision (such as U.S. state or U.K. county). Users compensated by searching by batch number. While batch number searching is still supported, most users will prefer searching by name instead of number.

2. Previously, indexed entries and community contributed entries were mixed into a single collection. The reliability of the two is different, so users needed to know the source of each result. Users compensated by examining the first digit of the batch number of each result. Batch number charts assisted users in recognizing indexed (“extracted”) entries and user contributed entries. Today, the two types are searched separately, assisting users to distinguish between them

3. While it grew to contain a tremendous amount of duplication, the IGI was originally envisioned as a file containing just one entry for each birth and each marriage that has ever occurred. When new records were indexed, entries were discarded that duplicated existing IGI entries. To compensate for this limitation, when an entry is not found among indexed entries, search the community contributed entries as well.

4. The original sources for entries in the IGI are not shown. For an indexed entry, look up the film number in the FamilySearch or FamilySearch Catalog. For a community contributed entry, the contributor may or may not have specified a source. See “Finding the Source of IGI Batch Numbers” for more information.

The information from the IGI is still around. Please see this list of blog posts from the AncestryInsider as cited in the FamilySearch Research Wiki:


The following blog articles were written by the Ancestry Insider.


No, really, you need to read through all this stuff to understand the issues. The contributed records, those submitted by members of The Church of Jesus Christ of Latter-day Saints are in the Genealogies section of the FamilySearch.org website. Here is a screenshot: 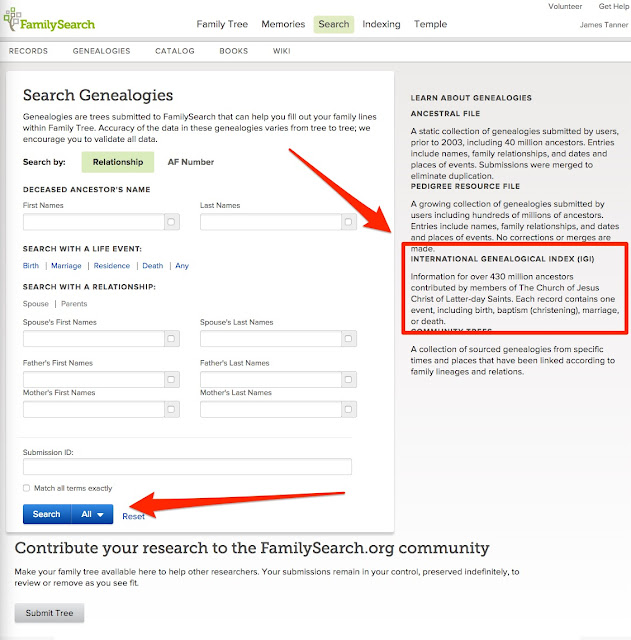 The blue link, shown with an arrow, has a dropdown menu that permits the user to search the IGI separately from the other databases, i.e. search each database separately.

The information in the IGI was used to create individual entries in the NFS program. Subsequently, in NFS, many of the IGI entries were combined with duplicates. This combining of records was done initially by FamilySearch but later by the individual users of the NFS program. There were still, left over, uncombined records in NFS. Both the combined records and the residual uncombined records were used as the basis for the records in the FamilySearch.org Family Tree. This is an overly simplistic view of what happened, but the effect is that some of the entries in the Family Tree contain combined information from the IGI. 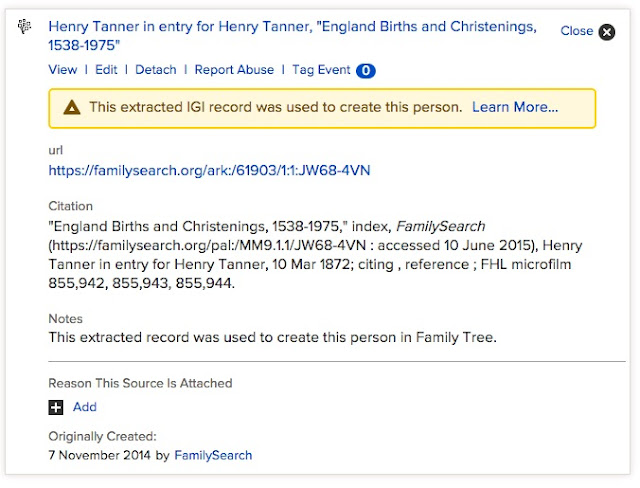 Now, I get to the two previous posts I wrote about this situation:


These two posts elicited some excellent comments pointing out the complexity of this issue. What do we do about cleaning up the entries in the FamilySearch.org Family Tree? You can take your own position on the subject. The problem originated from the improper combining of unrelated individuals. There is no question that the link to the record is valuable, but the question is valuable to who? Do I care that there is an individual in the English records with the same name as my ancestor? Probably not. The danger is that unsophisticated users of the Family Tree will add this information into the entries regardless of the lack of connection between the families.

Just so you know where to go to begin understanding what is going on.
Posted by James Tanner at 7:29 AM