Note the comments and links below. This is a rather complex issue and we all need all the explanations and help we can get.

I am not-so-patiently waiting for the day when FamilySearch has finally completed loading all of its stored up data into the Family Tree program. Here is the latest hurdle we have to cross to "clean up" the data.

FamilySearch has gotten to the point where they are adding all of the data in their massive files from the International Genealogical Index (IGI) extraction records. For example, here is a record added as a source to my Great-grandfather, Henry Martin Tanner: 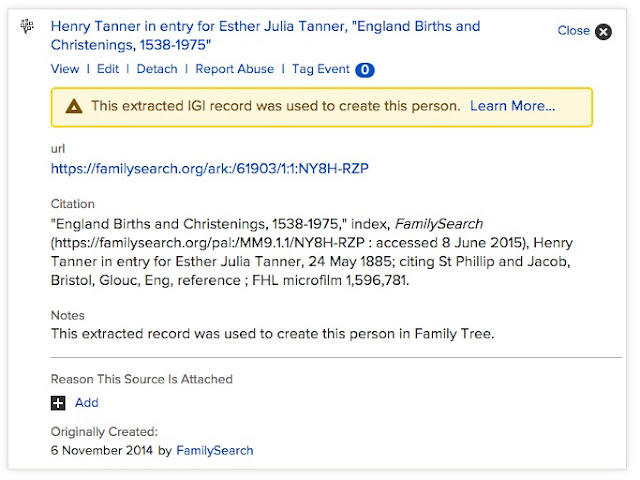 This source claims to be an extracted IGI record that was used to create this person. I take that to mean that the record here for Henry Martin Tanner was "created" by using the extracted record from the IGI. When I click on the link that says "Learn More..." this is the explanation that I get: 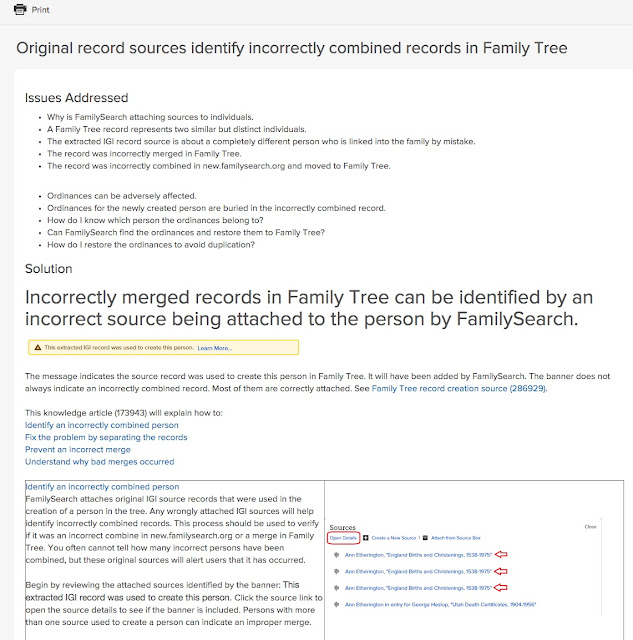 This explanation is very long and extremely involved. I have read the explanation several times and I still do not understand it. Apparently, if I follow all of the instructions, I am supposed to use this new source to create a new person in the Family Tree who is not related to me in any way and then add this reference from the IGI as a source to that new person. Then after doing that, I can detach the source from my own ancestor. Of course, the assumption here is that this source attached by FamilySearch does not apply to my own ancestor, which might or might not be correct.

OK, so what was or is the original record from this source? Here is what the IGI record is referring to: 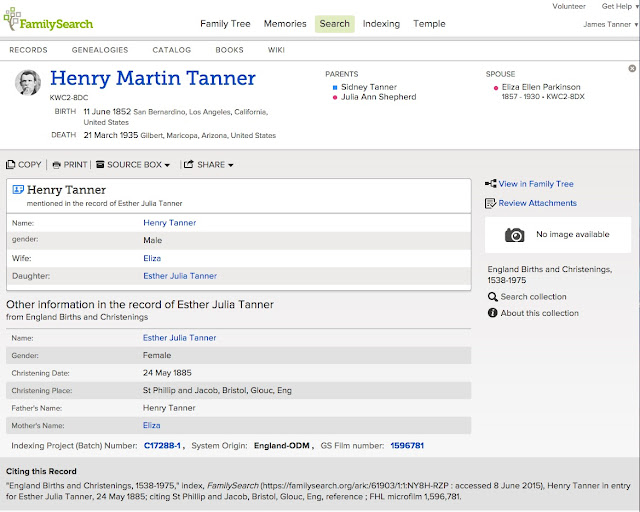 My ancestor, Henry Martin Tanner, was born in California, moved to Utah and lived most of his life in Arizona. Except for trips to Utah, he never traveled outside of the Western United States. I am not related to the person named in this record, Esther Julia Tanner from England. The explanation for attaching this record states the following:

Do not detach a source added by FamilySearch because it is attached to the incorrect person until a new record is created for that person. The flag "This extracted IGI record was used to create this person" indicates an original source record. If you believe the original source for this person is linked incorrectly, identify the person that is best represented.

OK, so I try to follow the instructions which say,


Review linked family members to determine which source is correct for the person represented. In this case, the Ann Etherington born in 1744 could not be the daughter of the John Errington born in 1793 nor the daughter of Elizabeth born in 1799. The Ann Etherington represented by the 1830 sources seems correct and aligns with the other information in the record, including the place. Using these clues you decide the 1830 source is correct and the 1744 source represents an incorrectly combined record.

Note: Begin by researching and gathering as many facts as possible for each person. Identify which facts belong to the person represented in your family tree and which should be moved to another record. It is better to do the research and not guess before making changes.

Now, I am completely lost. I am certain that the Henry Tanner in the IGI record is not my Henry Tanner. There is a record for Esther Julia Tanner in the Family Tree, who, by the way, is not related to me at all: 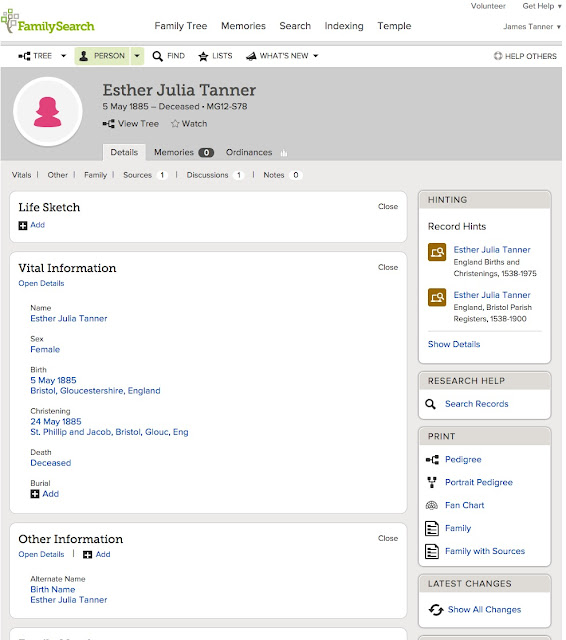 In fact, the record for this unrelated person includes the correct christening information and a reference to the source added to my own ancestor, Henry Martin Tanner. 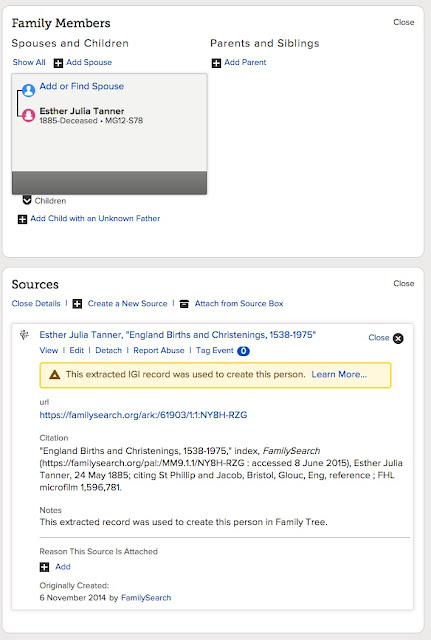 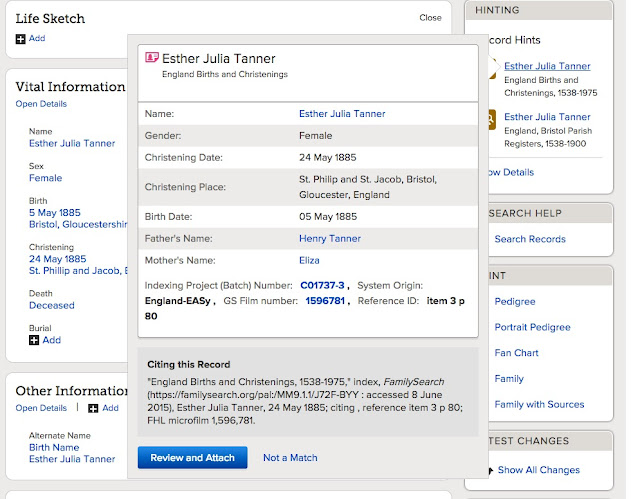 Do we want the original record or the IGI index of the record? Is the IGI the source? Do I really want to create a new person from this IGI record as explained by the rest of the long instructions? What is really going on here?

Are there incorrectly combined records? Who knows? We can no longer look at new.FamilySearch.org. One thing, the record for Esther Julia Tanner does not have any parents listed. Her parents are identified as Henry Tanner and Eliza (the same names approximately as my great-grandparents). The identification of this record as a source for my family seems to be a case of same name = same person or in computer terms, garbage in - garbage out. Can we positively identify the parents of Esther Julia Tanner from the record we are given? This is assuming I care to take the time to work on the ancestry of a person to whom I am not even arguably related to.

Can I find a Henry Tanner in the Family Tree? The only thing I know at this point is a name and a christening date for his daughter in Bristol, Gloucestershire, England. I have no birth, death or any other information. The search form for the Family Tree is as follows: 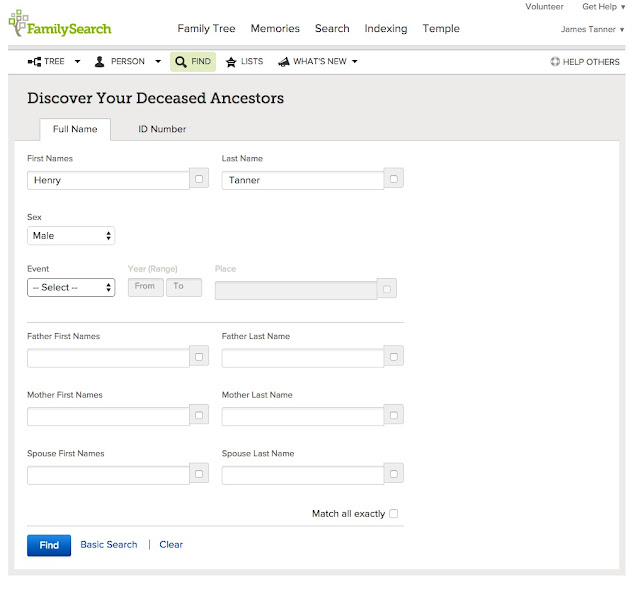 This is the Advanced Search. You can see that the information for searching is somewhat limited. I do not know any of the information that would let me determine this Henry Tanner from all the others. The results of the search brings up 1805 different Henry Tanners. If I add in the name of his spouse as Eliza, I reduce that number to 105 results. Not one of the Henry Tanners listed is married to an Eliza and lived in Bristol. Of course, the name "Eliza" could be Betty, Elizabeth etc.