The Issue of Combined Records on FamilySearch Family Tree

Here is part of a recent comment from commentator, Gordon Collett:


Here is the answer for this blog. Incorrectly combined records from New Family Search are a major concern. Sometimes wildly incorrect alternate names in Family Tree are the last remaining clue that an incorrect merge occurred. Take your example of Jeane Cheverill and Jane Richard. Those two last names are so different that it is highly likely that a bad merge took place in New Family Search. This means that without checking, you don’t know what information in the Family Tree record, including birth information, death information, marriage information, spouses, and children are Jeane’s and which are Jane’s. These are all fairly easily to correct by going back to the records, correcting the information for your ancestor, and letting the descendants of Jane recreate a record for Jane, or work of an existing duplicate for her, and correct her record. What is not so easy to correct, however, is the ordinance page. Currently, looking at that page, there is no way to tell which ordinances are Jeane’s and which are Jane’s. For all you know, Jeane has never had any ordinances done at all even though they look complete, because all the ordinances showing are Jane’s.

We’ve been told on the Family Search feedback boards that at some point in the future, Family Search will give us the ability to look up our ancestors in the ordinance database and verify that the ordinances showing in Family Tree really belong to our ancestors and that we will be able to request corrections in Family Tree. At this point, where there has been an obvious bad merge in Family Tree, I am putting a note to that effect, warning that the ordinances showing may not be valid. Also, I am very glad that I have never gotten around to copying any ordinance information from New Family Search or Family Tree into my personal home computer genealogy program (except for ordinance work my family has personally done) so all the dates there are from the IGI, that is pre-NFS, and I know those dates are correct.

This is a screenshot of the list he is referring to a person named Jeane (Jane) Cheverill b. 1674: 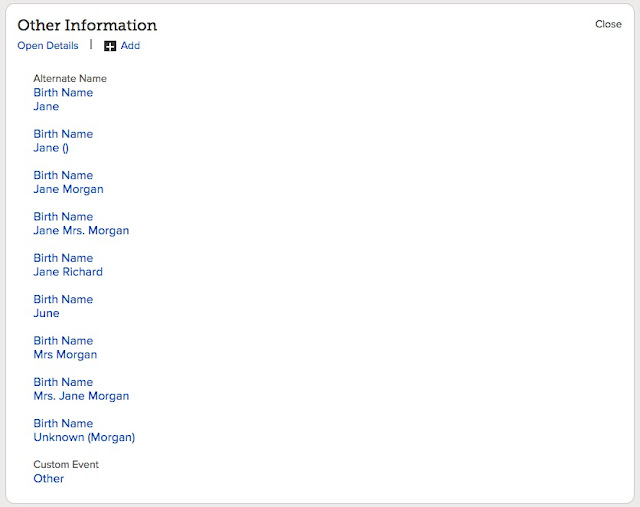 Let me point out a few additional comments and issues.

Most of the names appearing in this particular list are obvious mistakes. For example, Mrs. Morgan. However, let's suppose that there are two entries that have been wrongfully combined; one for a person named Jeane Cheverill and another for a person named Jane Cheverill. Since there are no sources attached to this person, how can I tell, from this record, that there are, in fact, two different people combined in this record?

In some cases, this may be very difficult to determine without access to the list of combined individuals. Are we then to assume, in all these suspicious cases, that ordinance work needs to be redone to assure ourselves that it has been completed for both combined records? I think not. This case is probably more typical than it is unique.

This particular line was part of my initial survey beginning over thirty years ago. In fact, as far as my records are concerned, my extended line differs considerably from what is presently in the FamilySearch.org Family Tree. For all practical purposes, my line ends some generations before the one shown on the Family Tree. I suggest that as I begin working on this particular problem, which presently is not on my short list of things to do, that the issues will be resolved. I am guessing that this particular line will "disappear" from my pedigree with further research.

The combined person issue has some other aspects. Given the origin of the information poured into new.FamilySearch.org, the ordinance work for these individuals with multiple submissions, as evidenced by the number of alternative birth names, was more than likely done multiple times. Arguably, if this is not the case and your ancestor was wrongly combined with one of these multiple combination people (aka IOUSs) then you will not see that all the ordinances have been done for your person, they will simply not be in the Family Tree.

The real solution to this problem is what I am in the process of doing, working systematically through my pedigree on all my lines, adding copious sources and verifying every possible date and event. Right now, I see no need to be concerned about the fact that one of my ancestors may have missed an ordinance when the opposite, multiple ordinances, has been the case for many years.